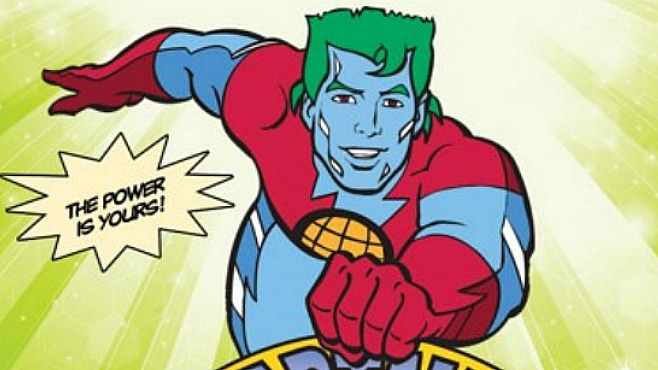 Captain Planet and the Planeteers: Educating on Environmentalism

Captain Planet and the Planeteers is more remembered as an animated television show than as its origins as a comic book series. While this series doesn’t compare to the super hero classics in terms of popularity, it had a noble goal of educating children on environmental issues.

The premise centers around five children who are chosen as “planeteers” to defend the Earth from pollution. They are each given a ring by Gaia, who is the Earth spirit that is awoken by the dangerous level pollution has reached over the last century. Each ring represents a different element and each character represents a different continent. Kwame hails from Africa and has the power of Earth. The power of Water belongs to Gi, who comes from Asia. Wheeler is from North America and has the power of Fire. Linka hails from the Soviet Union (which was changed to Eastern Europe in the show following the fall of Communism) and has the power of Air. The fifth and final planeteer is Ma-Ti from South America and he has the power of the Heart. When they combine their rings they summon Captain Planet, a superhero that embodies the combined powers of the planeteers and rids the world of evil Eco-Villains.

The Eco-Villains are the antithesis of the Planeteers, with each character represented as an environmental issue facing the planet. Hoggish Greedly is the first villain encountered by the planeteers and represents the dangers of over consuming resources out of greed. Verminous Skumm is part human and part rat, and he represents the sanitation and crime issues that spawn from urban expansion. The dangers of unethical experimentation with technology is represented by Dr. Blight, and Duke Nukem represents the dangers of nuclear technology (a character which has really taken on a life of it’s own). Looten Plunder represents shady business practices and Sky Sludge represents short-term thinking. Finally, Zarm is a former Earth spirit that represents war and destruction. This is quite the laundry list of important topics for a simple comic.

Issue three of the comic book series is one of the most memorable issues for its impactful message on how teamwork and willpower can save the planet from pollution. The main villains in this issue are Looten Plunder and his henchman Argos Bleak. Their plan is to earn a hefty ransom by threatening to launch a missile filled with toxic waste at Washington D.C unless they are paid $1 million. The planeteers are on Hope Island playing a game using their rings when they get the news. Before Gaia summons them for their task, Ma-Ti is struggling because he feels his powers are weaker than the others. As the story is titled “The Power of Heart”, this foreshadows how Ma-Ti’s powers will be proven as the most useful of them all. The short version is Captain planet and the rest of the planeteers get captured and Ma-Ti uses the power of Heart to mentally connect with the animals and unleash a stampede that frees his friends. The thematic message of this plot is that willpower, or the power of the Heart, is a force powerful enough to free the planet from the prison of pollution.

Another memorable issue is the eighth one. This issue contains three separate stories, but the best by far is “Showdown oh Hope Island”. In this story, the Planeteers have their rings stolen and copied by the Eco-Villains. This unleashes Captain Pollution, who is a super-villain equal in power to Captain Planet. The main message of this story is how easily the combined effects of each type of environmental problem can destroy the planet with alarming speed. The fact that Ma-Ti uses the power of the Heart to destroy Captain Pollution by making him feel the pain of the pollution he is causing shows once again how children can save the Earth with compassion for the environment.

Although Captain Planet is no Batman or Spiderman, it can be argued that this comic series has had a significant impact on the rise of environmentalism into the mainstream, along with many other older and dynamic children’s shows, such as The Magic School Bus and even Sesame Street. Though these two examples do not have corresponding comic books, the impact they have on children and their relationship with the environment is just as powerful. Just think about the plethora of EVs that are being developed by auto manufacturers, or the growing availability of clean energy throughout North America.  Captain Planet was so inspirational to the growing community of concerned individuals, that even a Captain Planet Foundation was founded in memory of the comic books and show. Many of today’s environmentalist leaders are the children who grew up on Captain Planet and the Planeteers, and they are slowly by surely putting a dent in the real eco-villain’s plans to ruin the planet.