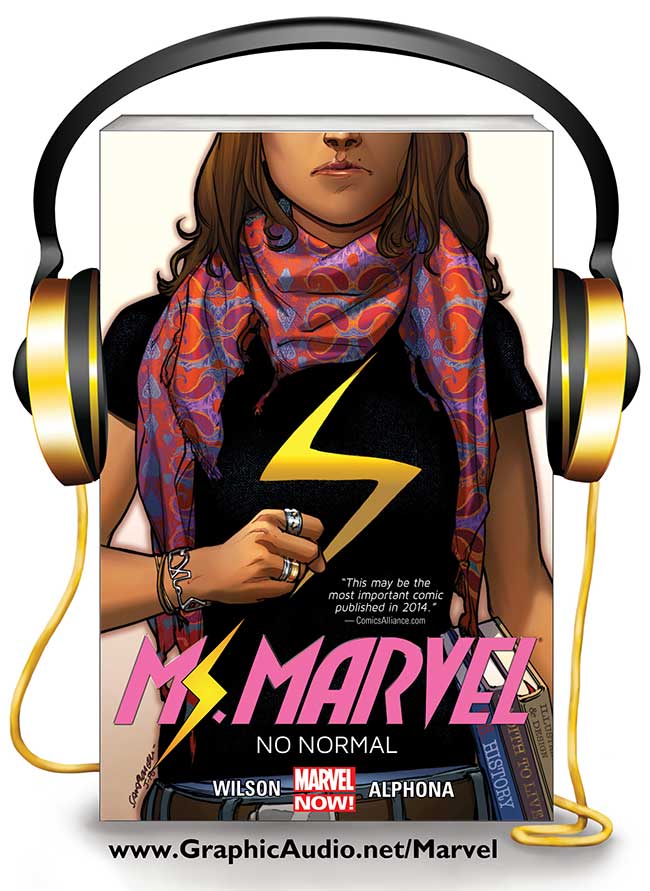 In case you missed all the excitement first brought to you at SDCC, we’ve got you covered…

You’ve seen and read about the highly acclaimed and inspirational new Marvel hero, Ms. Marvel. Now hear what she sounds like!
For the first time ever, GraphicAudio has adapted a Marvel character directly from the comics themselves. This is your chance to hear Ms. Marvel issues #1-5 as collected in the trade Ms. Marvel Vol. 1: NO NORMAL. Through cinematic music, a full cast of voices, digital sound effects, you’ll be immersed in this mega-hit comic book series like never before!
Now includes bonus roundtable interview with Creators Sana Amanat and G. Willow Wilson and GraphicAudio Director Richard Rohan.

Kamala Khan is an ordinary girl from Jersey City – until she is suddenly empowered with extraordinary gifts. But who truly is the all-new Ms. Marvel? Teenager? Muslim? Inhuman? As Kamala discovers the dangers of her newfound powers and unlocks a secret behind them as well. Is she ready to wield these immense new gifts? Or will the weight of the legacy before her be too much to handle? Kamala has no idea either. But she’s here to stay!

Mixed in 5.1 Surround Sound DTS and in Stereo, MS. MARVEL is available at www.GraphicAudio.net/Marvel and via the FREE GraphicAudio Access™ Mobile App which allows customers to directly download titles on their Android or iOS smartphones and tablets.

About Marvel Entertainment:
Marvel Entertainment, LLC, a wholly-owned subsidiary of The Walt Disney Company, is one of the world’s most prominent character-based entertainment companies, built on a proven library of more than 8,000 characters featured in a variety of media over seventy-five years. Marvel utilizes its character franchises in entertainment, licensing and publishing. For more information visit marvel.com.
© 2015 MARVEL