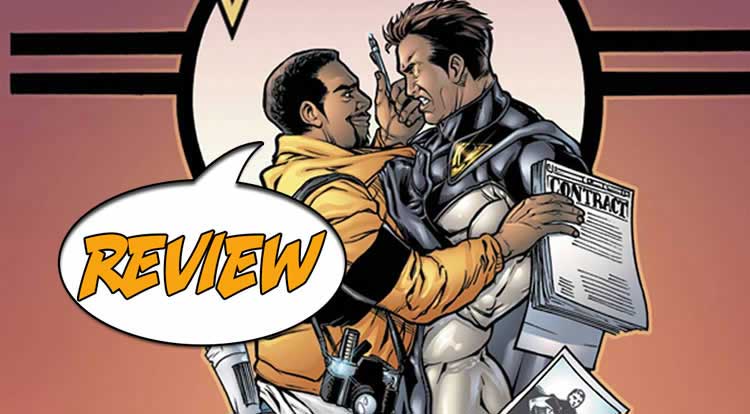 I don’t always remember my first encounter with a comics creator. In fact, it may take several “meetings” for me to “notice” a great writer or artist.

However, when it comes to both Jay Faerber and Jamal Ingle, I never have a problem with this. The first time I read their work was back in 2003 in this Image Comics series, Venture. The cool thing is that Action Lab is now reprinting the series, and I’m collecting them because they’re so worth having! (I never got good copies the first time around, but I just had to read them!)

Previously in VENTURE: “The groundbreaking superhero series continues! Reggie Baxter has discovered Joe Campbell’s super-powered secret. Joe can’t scare him off and if he does anything to Reggie, his quiet life is over. Now Joe is reluctantly forced to do the one thing he never wanted to do: wear a cape. Veteran creators Jay Faerber (Secret Identities) and Jamal Igle (Sensation Comics Featuring Wonder Woman) turn superhero tropes on their ears with this exciting series.”

A COMIC AHEAD OF ITS TIME

In my mind, Venture is playing out on several levels in several of the current Superman family titles. What happens in this book is that a newspaper reporter blackmails a superhero after discovering his secret identity. Right now, Lois Lane has publicly revealed Clark Kent as Superman’s secret identity. That very likely could have happened in this series, so I feel this comic was at least a decade ahead of its time!

Faerber has done a terrific job of exploring the superhero genre with books including Noble Causes, Dynamo 5, Captain Universe (from Marvel) and Anti-Hero (from Monkeybraincomics.com). Each time he’s found a new angle to dive into, and I’ve enjoyed every minute of it! Of course, he also does a great job on other books (and TV), including Image’s Copperhead currently, so I’d get anything with his name on it!

The whole series explores the relationship between a super-powered being and those around him or her. Under threat of having his secret revealed, Joe must take on a super-heroic identity, something he doesn’t want to do. A lot of the fleshing out of this concept takes place in this second issue.

Reggie arranges for a friend to create a costume for Joe, which ends up getting his hair shortened. Joe hesitates as he continues to take steps into the world of public superheroics, but before long, he’s appearing in public on his first mission. However, unlike most costumed crusaders, he’s really good at talking criminals to surrender. That doesn’t go over well in the press, who have doubts that this is even real at all.

You can see how great Faerber’s concept is right away, and even at this earlier stage in his career, he excels at throwing curve balls at us. To this day, I rarely can predict what will happen next in his books. And I love that!

What I have loved about Mr. Igle’s art from this book forward has been his ability to capture both action and expression. I often point this out when I come across a great artist, and Jamal’s work is one of the very best.

Surprises happen a lot in this issue, and Igle makes the most of them with excellent “camera” angles as well as facial expressions. Then, too, when Joe jumps into action, we’re pulled along with him through the dynamic art, again utilizing powerful perspectives and figures. Just great!

Just like Zenith before it, I’m loving revisiting Venture. If you haven’t read it previously, I highly recommend you find this series. My hope is that it will be collected into a trade (even a hardcover edition), but I’d get the individual issues since that hasn’t been announced …yet.

One of the things I really loved about Venture was making the reporter a black man. He’s very much us in that we’d likely want to see a real person with powers dive in and right wrongs. We don’t see a person of color in this kind of situation often enough to suit me, so making Reggie as real as Joe was a huge advancement for comics, I feel.

Again, thank you, Action Lab, for bringing this landmark comic back in print! I just want to once more request a hardcover edition. It would look ideal right next to my Zenith collection!

A landmark superhero comic a decade ahead of its time!