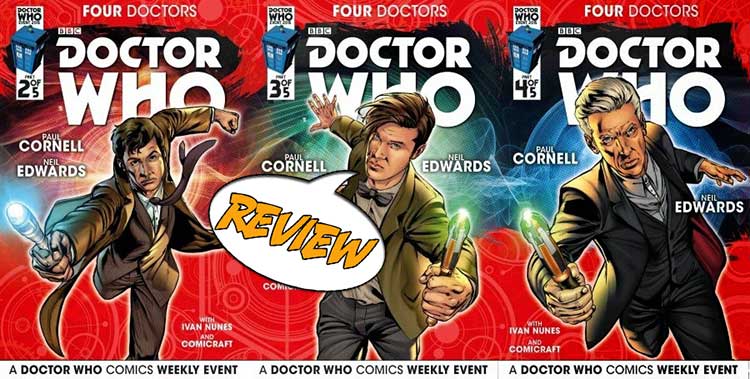 The biggest events in Doctor Who usually involve more than one Doctor. So what kind of craziness can we expect when there are FOUR Doctors? Major Spoilers reviews Doctor Who: Four Doctors #1 from Titan Comics! Previously in Doctor Who: The immortal time traveler has worn many faces during his travels, and he has sworn to protect everything in the universe. But when the fabric of the universe is threatened, sometimes more than one Doctor is needed…

We have never seen the War Doctor at the height of his War Doctor period, but this issue does kick off with a look at the Time War between Time Lords and Daleks, and the War Doctor’s involvement in it. It is only one battle of the war, but the implication that the Time Lords will hinder their allies later is somewhat troubling. Granted, the Time Lords have always been a troubling lot,and the discussion reminds the readers that the War Doctor is, and always has been, at odds with his fellow masters of time and space.

Things are never simple, especially in an issue called The Four Doctors. Clara learns that Ten, Eleven and Twelve are destined to meet one another, and travels to Paris, 1923 to keep the Doctors from that meeting. In Paris, she runs into the previous Doctor’s companions, and while the trio attempt to figure out a plan to keep the Doctor’s apart, the Doctors meet each other anyway.  This meeting spells the end of the Universe!

While I like Clara’s explanation on how she knew where and when to be, her exposition and plan is ultimately a let down. Paul Cornell spends four pages explaining the reason why, but then wipes it away as Ten and Eleven arrive and tell everyone not to believe a single word the young lady is spouting. It is probably the most problematic part of the issue that seems set on making many of the same mistakes the television show does for the sake of filling time. On the plus side it does lead to one of the best moments in the issue – Twelve walking in and declaring “We’re all going to have some sort of Multi-Doctor Event! Whether you like it or not!”

What Paul Cornell does best in this issue is give us the personalities clashing with each other that we expect. Ten feels like Ten, Eleven is all the quirky, and Twelve does the lapel thing. Scattered throughout the issue are the words and phrases that have become standards for the Doctor and his companions, and fans of the series are going to giggle in glee when Timey-Wimey, Run, Fixed Points in Time, and much more are tossed out willy-nilly. Paul Cornell keeps the issue from devolving into utter nonsense like someone who doesn’t have a social switch and suffers from diarrhea of the meme.  Cornell keeps it together, and weaves the words in such a way to make the events and  dialogue flow smoothly while paying the necessary fanservice to dedicated fans.

As we’ve learned from watching time travel stories, when you cross your own timeline, bad things are going to happen, and Reapers are there to clean up the mess.

Finally, Cornell serves up a fantastic back-up story of Eleven going comics shopping, which is referenced earlier in the issue, and it is total crazy fun, just like you would expect from Eleven.

One of the biggest concerns when it comes to comics that feature likenesses of recognized people is often the comics interpretation fails to make that connection, or the likenesses look like they have been traced from still photos or screen captures from television.  Fortunately, Neil Edwards doesn’t fall into this trap, and delivers characters that look like their live action counterparts, giving them life and depth in each panel. Likewise his environment renderings are spot on, and I appreciate his use of varied angles to tell the story.

On the art side, a lot of credit needs to go to Ivan Nunes who brings fantastic coloring to the issue. While subtle shading and blended tones work on characters, Nunes takes the time to create light effects that look natural. My favorite bit of coloring comes early in the issue when the Voord leader has a chromatic aberration or prismatic effect going on on the surface of the leader’s suit.  It is so well done, and the attention to detail is much appreciated.

Look, it is #DoctorWhoDay, and big events mean something is needed to make everything seem worthwhile.  The first installment of Doctor Who: The Four Doctors hits all the right spots – granted, there may be some who tire of the constant references, but for the rest of us, making it work in the narrative shows the talent of the writer. The art is fantastic, and the big setup means the next  four issues are going to be must reads for this reviewer. Do yourself a favor and pick up this book today.

DOCTOR WHO: THE FOUR DOCTORS #1

Doctor Who: The Four Doctors #1 has everything you want in a Doctor Who event comic.