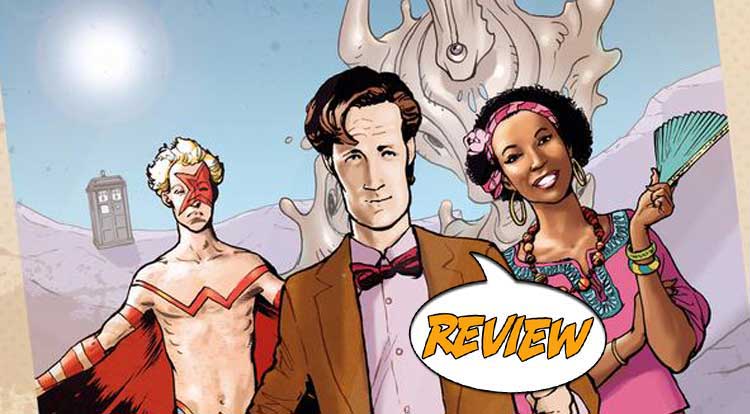 Forced to make terrible decisions, The Doctor has been abandoned by his own TARDIS, left adrift without the ability to travel through time and space.  But it gets worse when he finds out who his TARDIS has chosen as her new master.  Your Major Spoilers review of Doctor Who: The Eleventh Doctor #15 awaits! Previously in Doctor Who: The Eleventh Doctor : Pursuing the fleeing Entity across the galaxy has caused The Doctor to face some of the most difficult of challenges, and he has fallen short of his ideals and has lost more than he bargained for.  Abandoned by the TARDIS, all seemed lost.  Absorbed by the Entity in ancient Rome, Jones realized his ultimate chameleonic talents and reunited both the Entity and ARC, appearing to the demoralized Doctor and Alice to offer them a chance to travel anywhere in time and space…  aboard HIS ship.  There’s only one place The Doctor wanted to go – to wherever his TARDIS is right now, which turned out to be London, in 2015.  The doors of the TARDIS opened to reveal it is now in the control of… The Doctor’s mother?

‘THE DAY THE DOCTOR DIED’

I’ll say one thing for Ewing, Williams and company: They certainly grasp the Eleventh Doctor’s level of capital-d Drama, opening this issue with Eleven staggering through a graveyard, with a caption reading, “The sky was a cold, slate-grey on the day the Doctor died.”  This is a tweed coat-wearing Doctor, by the by, so it has to take place somewhere in the missing years before he met Clara Oswald (which makes cynical me happy.)  I’m much more positive about comics companion Alice Obiefune, who finds him staggering about, and urges him to run, as she (along with shapeshifter Jones and a being called ARC) have put together a plan to confront the alien who has taken his TARDIS.  It’s truly lovely to see Alice in action, telling her Doctor that she knows he thinks on his feet, and having her be 100% right about it.  Given the opportunity to get out of his own head, The Doctor rallies, and uses the telepathic circuit of the TARDIS (tied to Alice’s brain-waves now) to convince his ship that all is not lost, and manages to win, by losing.  Y’know, that wonderful complex paradoxical thing that always seems to pop up in Eleven’s TV outings?  I dig it.

What most wonderful is the fact that defeating the antagonist isn’t the end of the issue.  Befitting the last chapter/season finale nature of the issue, we get truly touching moments for the alien ARC, the shapeshifting Jones, even for Alice herself, whose desire to once again see her lost mother touched off the whole adventure.  (The Doctor also gets his emotional moment, referencing all his previous selves and pleading to the TARDIS that he’s still the same man he’s always been.)  Simon Fraser’s art is excellent for the story being told, with a wide variety of facial expressions (even for characters who don’t actually have faces) and really detailed backgrounds and storytelling.  Sequences that take place within TARDIS actually capture the bizarre, over-worked steampunk vibe that Eleven’s control room has, which is wonderful enough in itself. With Alice making her presence known in ‘The Four Doctors’ crossover, it seems likely that she’ll return for the next season/arc of Eleven’s story, the prospect of which makes me happy, as she’s one of the wonderful alternate-medium companions who is as interesting and engaging as her live-action counterparts.

In short, this book works as a comic, it works as a Doctor Who story, and it works within the portion of the spectrum that my analytical brain identifies solely as an Eleventh Doctor story, providing a meaningful wrap-up to the events of the previous issues.  Doctor Who: The Eleventh Doctor #15 almost effortlessly shows off what makes Eleven fun, hits the right, satisfying character notes, and has well-defined, excellent art from cover to cover, earning a very well-deserved 4 out of 5 stars overall.  In my mind, this is the best of IDW’s Doctor Who ongoings (though all of them are well-handled, currently.)