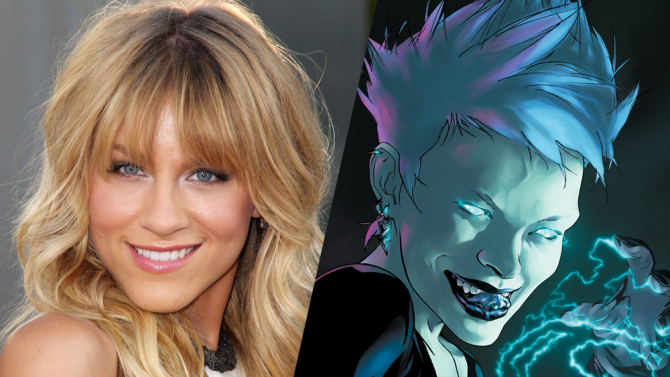 Livewire first appeared in Superman: The Animated Series, but like Harley Quinn before her, the character was popular enough to make it into the mainstream DCU. Now, with the Supergirl television series upon us, Livewire is making her way back to the small screen.

Britt Morgan (True Blood) has been cast as Livewire (aka Leslie Willis), and will guest star sometime in season one.

In the animated series, Leslie Willis is a shock jock who constantly bashed Superman on her radio show. During a live concert, lightning struck the stage, turning Leslie into Livewire.

In the last couple of weeks, Berlanti Productions has added Peter Facinelli as Max Lord, Jenna Dewan-Tatum as Lucy Lane, and Chris Browning as Reactron. Also appearing this season will be General Sam Lane, Red Tornado and Non from Krypton. While the villain of the week has been a staple for superhero tales since forever, I hope Berlanti doesn’t deviate from the success of The Flash by keeping the villains alive to fight another day.

Supergirl premieres on CBS on October 26, at 8:30 PM. You can read the Major Spoilers early review of the season premiere, here.