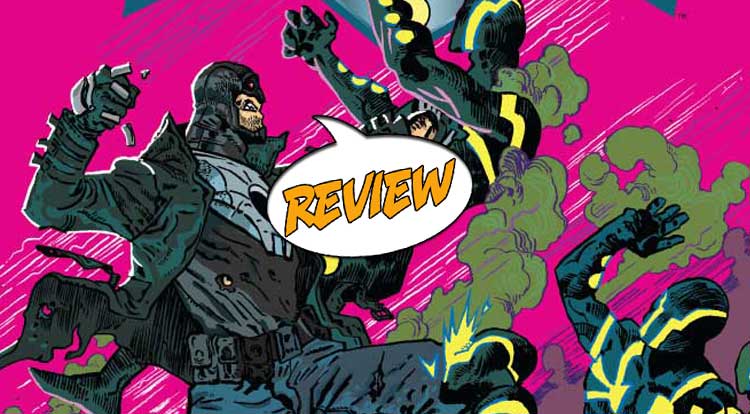 No longer with the Authority (or with longtime partner Apollo), the man known only as Midnighter is striking out on his own for the first time.

The emphasis is on “striking.”  Your Major Spoilers review of Midnighter #3 awaits!

Previously in Midnighter: Originally created as part of a secret Black Ops Stormwatch team, The Midnighter and his partner, Apollo, lived a desperate underground existence for years, until joining the newly formed Authority.  With the Flashpoint retcon, they were once again members of Stormwatch, and found that their attraction for one another was still there, even with time-travel shenanigans and such, but now the Midnighter is a solo act for the first time in his career.  What will keep the ultimate fighting computer occupied in a brave new world?

If the first page of this issue is to be believed, he’ll be occupied for a battle with the self-replicating jerkface known as Multiplex.  When faced with the possibility of beating up an endless stream of goons, Midnighter smiles a devious smile, and remarks “I guess I DO know when my birthday is.”  Flashbacks quickly ensue, as we see him in his downtime, hanging out with friends at a dance club (and refusing to dance, with some nice, playful dialogue) before finding out that a young girl has been kidnapped and the authorities either can’t or won’t respond.  Cue the leather suit, as Midnight sets out to find the reason for her abduction.  Steve Orlando manages to pack a LOT of story into 20 pages, with great character moments for our main character, an inventive premise (thanks to a machine stolen from the “God Garden,” the girl has been captured so that villains can literally steal her youth and sell it to the highest bidder) and even some romance for Midnighter.  We also finally get the story of what caused his (hopefully temporary) split from Apollo, a flashback to before issue #1 of this book.

I really enjoyed the art on this issue, with some crazy layouts that remind me of J.H. Williams III and his creative layouts on ‘Batwoman.’  The battle with Multiplex is presented as a one-page collage, with jagged panels spread about to give us a clear visual of the proverbial ultra-violence of Midnighter’s assault, ending up being much more effective than a long, drawn-out fight sequence would have been.  In addition to the end of his old romance, hints of a new one between Midnighter and new friend Matt are given, and the issue ends with a tantalizing glimpse of crossover, as Midnighter confronts…

…Grayson, the man formerly known as Nightwing.  More than once in the issue, I found myself marveling at how much story the creators were able to pack in, without ever feeling rushed or cramped, and given the breakneck pace of Midnighter’s life (and fighting style), Orlando and Aco are a perfect choice for this book.

As someone who loved Stormwatch and The Authority in circa-2000 incarnations, I’m happy to see that they got the basics of The Midnighter down in this issue (especially after how underwhelming the New 52 Stormwatch book was at its lowest points.)  This issue gives us drama, combat, some much-needed back story and humanization for our main character, all with art that looks really cool and very unique.  In short, Midnighter #3 is a good’n, a well-written and engaging story, with above-average art and a solid feel for what makes this character tick, earning a very impressive 4 out of 5 stars overall.  Having missed issue #1, I’m now going to go back and catchup, while adding this to my monthly read pile…

Well-written, well-drawn and overcame the difficult hurdle of explaining his breakup with Apollo... A good read.