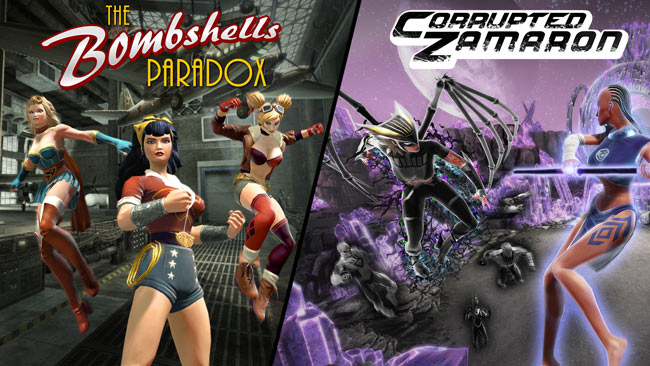 The latest episode of DC Universe Online is now available on the PC, PlayStation 4 (and 3), and DC has announced that the DC COmics Bombshells are joining the fight.

There are two adventures in the latest update to the MMORPG game that not only introduces the DC Bombshells characters, but alos the Black Lanterns!

The Bombshells Paradox – In this eight-person Operation, players travel through a rift in time and space to the world of the DC Comics Bombshells to battle the “Bombshell” Talia al Ghul. In her attempts to alter their timeline and change the outcome of World War II, “the Lady al Ghul” has created a tear in reality that must be fixed. Players must stop her and set the universe back on its correct path.

Corrupted Zamaron – A continuation of the War of the Light storyline, “The Black” has re-emerged in the universe and has targeted the Predator entity inside the Central Power Battery on Zamaron. Because of this threat, Indigo-1 of the Indigo Tribe has now joined the War of the Light. In this duo, players help Carol Ferris defend Zamaron from the Black Lanterns and will purge the Black Lanterns’ Corruption from the Battery.

DC Comics Bombshells Harley Quinn is also a playable Legends Character in the game. Wonder Woman, Supergirl and Catwoman Bombshells will be available for purchase as Legends Characters on Aug. 12, 2015, which is also the date non-DCUO members can purchase the new content.