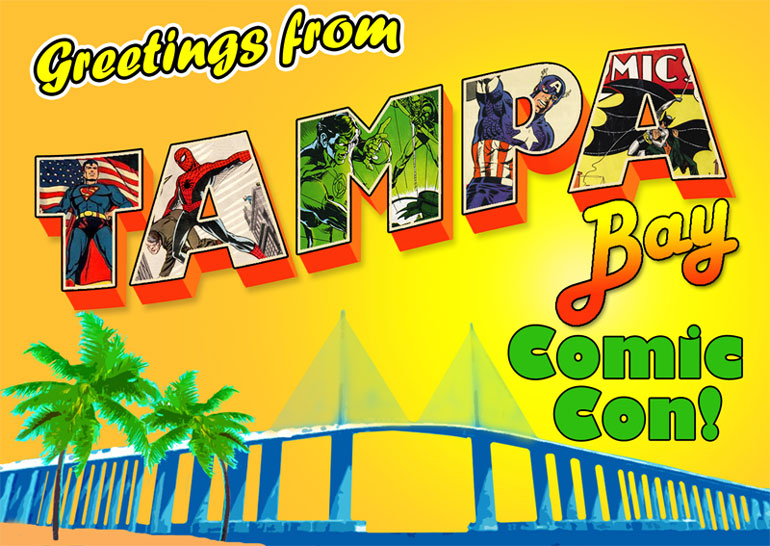 This past weekend was a busy one if you attended the Tampa Bay Comic Con! It ran from Friday, July 31st, through Sunday, August 2nd. It was a good event even though it seemed somewhat smaller than last year’s convention. Here’s their website!

It was held at the Tampa Convention Center, which was very near parking and hotels, making it one of the easiest to access I’ve ever attended.

Once again, I was working both behind and in front of a dealer’s table. It was a great experience whatever way you looked!

WHAT IS THE TAMPA BAY COMIC CON?

There were a lot of media guests, including: Carrie Fisher from Star Wars, Lea Thompson from Back to the Future, Linda Hamilton from The Terminator, Jena Malone from The Hunger Games, Keisha Castle-Hughes and Jessica Henwick from Game of Thrones, Freema Agyeman from Doctor Who & Sense8 and my favorite, Matt Ryan from Constantine. There were many interesting voice actors there, such as Tom Kenny, Billy West, Christopher Sabat, George Lowe, Janet Varney, Todd Haberkorn and Christine Cabanos.

There were a great many local artists selling their excellent wares, but not as many indie comics creators as I’d come across last year. Don’t get me wrong – the ones that were there had some terrific comics to buy. I just wish there had been more of them.

A lot of discussion panels filled the schedule, and I got to attend one on podcasting. I guess I’ve been at it long enough that I found the information being dispensed somewhat elementary, but I hope the other people attending found it helpful! Lots of people were in costume, and some were great. I saw many Constantine look-alikes there, for example. I particularly liked the person we called “Tall Spock,” a cosplayer who must have been over seven feet tall who had a great Spock outfit and makeup on. He even sounded like Leonard Nimoy! It was particularly funny when another cosplayer who was a great Spock met each other. They each raised their eyebrow suspiciously, then posed for photos. (See the photo above, left). There were also a LOT of things to do, and not just during the hours when the dealers’ area was open.

I also found the layout something unique in that Neal Adams was separated from the rest of the Guest Artists by a section of indie comics and other artists. We couldn’t figure out if that was an advantage or a disadvantage since some people were distracted by the bigger names while they led others closer to vendors like us.

We stayed in the hotel connected to the convention center, which meant we only had to walk 900 feet (Yes, someone had measure it.) to get to the hotel lobby. That was particularly great because it rained much of the weekend, so people were dashing to find cover quite a lot!

Friday was the quietest day, with a goodly number of people attending, but they paled in comparison to Saturday, which was really packed, and Sunday, which was slightly less attended.

I don’t know about you, but those are some early hours for Saturday and Sunday, it seemed to me. Dealers had to be there at least a half hour before everything got underway, which made for pretty short nights for most con people! On the other hand, I did talk with several families who were thrilled they could attend the convention early in the day so they could get back home with their treasures and get into other activities.

I have to give cudos to Kevin Maguire, who was located across the aisle from us. He was there every hour the con was open. I can’t say that for many of the other Guest Artists, some of whom came in shortly after opening while others straggled in much later. I do have to wonder if they were operating under “normal” con hours.

We were literally in the middle of the convention, and there was a HUGE walkway in front of us. A vendor on one side of us was unhappy with that, hoping that a smaller space would push attendees closer to us. On the other side, that vendor was thrilled to have the space to move around!

Last year, I was unhappy with the way one entered and left the main area. You had to go to either the far left or the far right to do that while the exit was in the middle. It was like that again, but the people checking badges really were over-zealous. I had entered the main floor when I realized I needed to use the facilities rather urgently. The Sentry at the door refused to let me go out to the rest room literally on the other side of the doors. Instead, I had to go across the entire area to the bathrooms on the other side. I made it, but not by much!

As much as I liked the aisle space, I felt like there was much less room overall this year. Last year, there was a set of stairs near a wide open area where cosplayers could get their photos taken.

If you know the history of this con, one well-known artist was banned from the event because he found cosplayers performing in front of his booth. He let his unhappiness be known on the Internet, which apparently caught the attention of the con’s organizers.

Well, in front of Neal Adam’s area, on Saturday this year, a large number of loud Deadpool cosplayers began what was called a “dance-off,” and for at least a half hour, no one could get down that aisle or get past them. (See photo left by Richard Rivera.) They weren’t near us, which we were grateful for. I understood why that artist had expressed his dissatisfaction the year before. Not only was the aisle jammed, but there were so many there that people could not get to any vendors’ booths. My suggestion is, if people want to do this, block off an area where they won’t interfere with the vendors trying to earn money! That would really help!

I also didn’t think it was a good idea to turn the lights nearly off five minutes before the convention closed. It made it tough for families to get to the door as there was a sudden rush of people scampering to get out in the dim light. Next year, I’d say they should wait until closing time, THEN slowly reduce the lights, if possible.

The food was convenient, but still very expensive. I know, I know…we’re paying for the convenience. I wish just a couple of dollars less was possible so we all had more to spend on the vendors and guests. The food tasted pretty good, but anyone wanting a Coke on Saturday had to embark on a treasure hunt since nearly all the food vendors were completely out of it! It was nearly that bad on Sunday, too!

Still, it was a great experience. We sold a lot of comics, t-shirts and posters, and connected with new fans of the Stabbity Bunny comic.

I haven’t found any scheduled date for 2016 yet, but I’m sure it will be back, so keep an eye on their website! It was a great weekend, and I’m almost caught back up on my sleep!