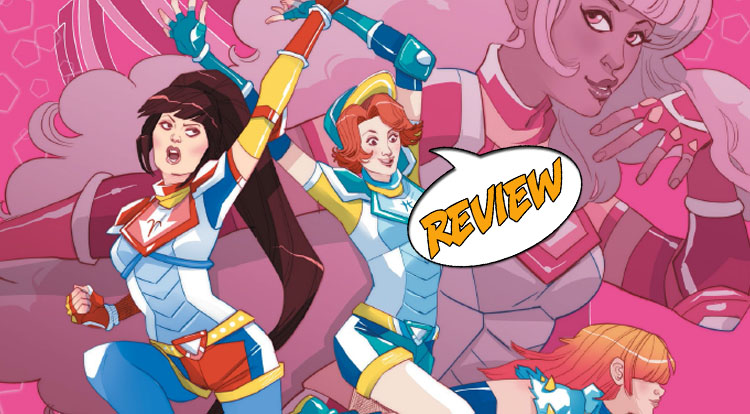 Zodiac Starforce #1 a group of magical girls is forced to reconcile their differences when their team member is threatened. Full disclosure, magical girl stories are very near and dear to my heart and I absolutely jumped at the chance to get my hands on an early copy of Zodiac Starforce #1 and this issue did not disappoint. Writer Kevin Panetta has the adolescent female voice down to a science in a way that, to a reader that was once herself an adolescent female, comes across as utterly genuine.

Emma is a former member of the titular team in Zodiac Starforce #1 who just wants to be a normal teenaged girl and go to parties, until she is attacked by a monster. This naturally necessitates teaming up with Kim (a former teammate), and revisiting old powers in order to save the day … at least for now.

The truly refreshing thing about Zodiac Starforce #1 is that it is an origin story for the reader in so far as they are meeting these characters, rules and situations for the first time, but it is not the origin of the team. The Zodiac Starforce was a team before we dropped into the story and something terrible wrenched them asunder. The cool thing about this dynamic is that not only are readers treated to experiencing the immediate presence of the story’s reality, but we are also straddled with the mystery of discovering what broke them apart.

The crux of Zodiac Starforce #1 is that Emma becomes injured in a way that requires the team to return to their spiritual leader – Astra. Astra is the ambiguously spiritual being that called the four girls together to begin with. As readers will recall, the Zodiac cycle has twelve representatives, yet the Zodiac Starforce only has four members (Pisces, Taurus, Aries, Gemini). I would like to credit writer Panetta for dropping the seed of the potential growth of the team, a storyline that I would be very interested in seeing going forward.

The inciting incident in Zodiac Starforce #1 masquerades as a pseudo-Mean Girls storyline although very quickly is revealed to be a much more sinister and dark event that. In my opinion, this speaks to the strength of Panetta as a storyteller. It’s fun to make this discovery throughout the course of the issue.

As with books like Lumberjanes and Giant Days there is a great diversity amongst the personalities and body types of the leading ladies, which speaks to Panetta’s awareness of the vast potential for his audience. Zodiac Starforce #1 is poised to be one of the best all-ages books on the shelf. It holds the romanticism and whimsy of the Japanese manga from which it takes obvious influences and the strength readers expect from Western comics characters like Wonder Woman. This new team represents the best things about feminine characters from across comics and it’s fun as Hell.

Zodiac Starforce #1 is so, so pretty. Artist Paulina Ganucheau injects both strength and beauty into the magical girls and the world they inhabit within the confines of their world. The poses she chooses from panel to panel are so full of energy and so dynamic that the issue reads fervently.

With Savannah Ganucheau’s elegantly chosen bright versus pastel colours on top of Paulina Ganucheau’s kinetic art the magic inherent in Zodiac Starforce #1’s narrative the art really comes alive. The issue is a feast for the eyes and easily as visually entertaining as it is in the narrative. The art team has poured their hearts onto the page, which I think comes through in the magical girls on the page.

Not only is Zodiac Starforce #1 lovely to behold, the colour design is obviously well thought out. Even down to the colour of the speech balloons or thought bubbles are well chosen to psychologically recall for the reader the colour palate/uniform design of the character it is referencing off panel. Little details like this make it clear that this story has been lovingly thought out and the reverence that the Ganucheau’s have for the story only adds to the reader’s experience.

Zodiac Starforce #1 was one of the series premiers that I was looking forward to the most this year and after reading the first issue I would highly recommend it to any – ANY – reader with even a passing interest in picking it up. It’s smart, clever, interesting and pretty as all get out. This is one of the true gems (pun intended, if you want to take it that way), of all-ages comics and the shifting face of this medium. Read it or buy it and give it to someone as a gift when it comes available.

Zodiac Starforce #1 is a bright, brilliant debut issue of what promises to be an exciting new series. It's lots of fun and smarter than one may expect. Well worth picking up.