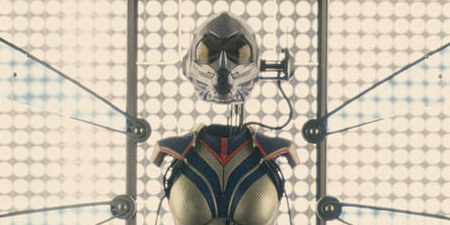 In Marvel Studio‘s latest cinematic offering, Ant-Man, audiences are treated to the briefest appearance by founding Avenger, Wasp. Whether she will turn out to be Hope Van Dyne or her mother Janet remains to be seen. The Wasp is easily one of the most important women in the Marvel Universe and we here at Major Spoilers wanted to celebrate that.

Were you hoping for some more Wasp in Ant-Man? Want to know where to look for tales of the Winsome Wasp going forward? We’ve got your back! Below Major Spoilers presents you with: Top 5 Wasp Stories! Writer: Rick Remender
Artist: John Cassaday
BUY IT ON AMAZON
Why Wasp Is Great: Captain American hand picks Wasp to join his new Avengers Unity Squad. The team is built from a combination of former Avengers and X-Men to show how both groups of heroes can work together. Not only is Janet the only female Avenger invited to the initial incarnation of the team, but she also privately funds the team in order to avoid having to deal with any form of government. Remender’s Wasp is scrappy and she challenges the ideals and choices made by team leader Alex Summers, which inevitably leads to romance.

#4. THE INITIATIVE: THE MIGHTY AVENGERS Writers: Brian Michael Bendis and Dan Slott
Artists: Frank Cho, Mark Bagley and Khoi Pham
BUY IT ON AMAZON
Why Wasp Is Great: This story does require a lot of knowledge of what was going on in the Marvel universe after the events of Civil War. This story has Janet Van Dyne doing both superhero stuff and science stuff and it’s very refreshing to have a story that focuses on Janet’s intellect as much as her beauty or her super talents. During the Mighty Avengers Janet is able to tweak a formula used on her by skull Hank Pym that allows her to grow to giant size as well as shrink down to the size of her namesake and she is the only one to deduce that Ultron has taken over Iron Man’s body. Wasp then goes on to lead the action of saving Tony Stark. Writers: Roy Thomas and Dann Thomas
Artist: David Ross
BUY IT ON AMAZON
Why Wasp Is Great: Throughout her history Janet Van Dyne has led many Avengers team and as soon as she and Hank join the West Coast Avengers Janet is in charge! There are many, many great moments where she earns her leadership role, particularly in dealing with strong-willed characters (Scarlet Witch and Hawkeye come to mind), which Roy and Dann Thomas contrast with the romantic subplot of Janet reconciling with Hank Pym. This storyline touches on two contrasting aspects of the Wasp’s personality and has her as the head of one of the largest Avengers teams. Writer: Kurt Busiek
Artist: Carlos Pacheco
BUY IT ON AMAZON
Why Wasp Is Great: In this storyline characters are plucked from time and space across the Marvel multiverse and the Janet Van Dyne chosen is the Janet of the present. The character that readers are familiar with is, in theory, the best incarnation of herself and she is immediately elected to lead this new Avengers team. Not only does Busiek put the Wasp in a leadership role right off the bat, but he honours aspects of her non-superheroic life. Janet has been a successful fashion designer for decades and during Avengers Forever she uses this skill to design entirely new costume for this new incarnation of the Avengers (and a shifting tone in comic book storytelling). All of the best aspects of Janet’s character is on display in this story AND it looks really, really cool. It is worth noting that, much like the Mighty Avengers, readers should go into this story knowing what was going on in the Marvel canon at the time of publication. Writer: Mark Millar
Artist: Bryan Hitch
BUY IT ON AMAZON Why Was Is Great: Janet Van Dyne is a straight up badass in the Ultimates re-imagining of the character. Not only does Mark Millar put her intellectually on par with Hank Pym and Tony Stark (at the age of 26 Janet has two PhDs), but the insectoid mutant aspects of her character are played up as well … and they’re kind of gross. Some of the most interesting and the most upsetting aspects of her character are intensified, which makes for incredibly compelling reading. Millar and Hitch also make Janet Van Dyne of Asian decent, which speaks to a level of in-panel representation that is over due, doesn’t feel like pandering, and serves to make Janet a more distinct individual. Ultimate Wasp is the most enhanced and most interesting version of the character in print – at least in the first two volumes of this series.

Have you read any of the trades recommended in this list? What is your favourite Wasp story? Let us know in the comments below!