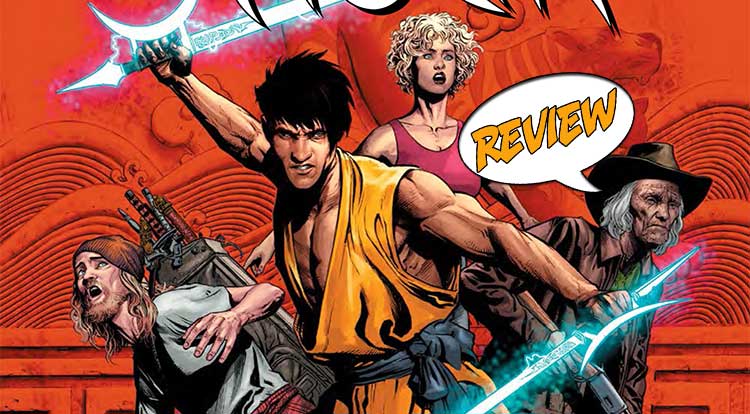 It’s been over 20 years since we last read of the adventures of King Tiger, and with the return of Barb Wire, it looks like it is time to return to Comics’ Greatest World.  Take the jump for the Major Spoilers Review of King Tiger #1 from Dark Horse Comics. Previously in King Tiger: I’ll be honest, it’s been such a long long time since I’ve read the adventures of King Tiger – the martial artist who fights demons and spirits. It all takes place in a fictional area of Nevada, and in order to perform the magic needed to combat the monsters from beyond, a physical ritual must be performed – in this case martial arts.

DROPPING YOU INTO THE ACTION

King Tiger #1 starts off normal enough with a number of people being kidnapped outside of casinos and places in and around Hoyo Grande, Nevada. The victims are then turned over to a scary cult for some nefarious deed. From story telling structure, this kind of introduction is relatively common, and sets up the third act reveal for our hero.

You are familiar with the hero, King Tiger, right?

King Tiger first appeared in Comics’ Greatest World way back in 1993. When that series ended, the character (to my knowledge) was never seen again until August 2014 when he appeared in a back-up story in Blackout #4. There are events that happened in that book that directly tie into King Tiger #1, so if you didn’t read or remember that year old issue, you are going to be a little confused. On top of that, King Tiger was first teased in January 2014, so there has been plenty of time for people to forget who the character is, and what the heck is going on.

I don’t know if this script has been sitting around since 2014 or if this was something that wrapped within the last three months, but it seems Randy Stradley understands that if this series is going to move forward, and still tie directly into the events that came before, a little backstory needs to dished out to the reader. While we don’t get everything dumped in our laps (which is a good thing), King Tiger’s roundabout way of training his new assistant Milo gives the reader a glimpse into the world of The Vortex.

Once we learn how King Tiger’s magic works, it takes us to that point in the story where the first act and second act smash into one another in an explosion releasing a monster from the other side, and the cliffhanger for the first issue.  As mentioned before, Mr. Stradley does an excellent job of using the tools of storytelling to get everyone – regardless of their knowledge of the character or story – up to speed and into the current story arc.

On the downside, there isn’t a lot of action involving King Tiger. Readers don’t really get a feel for what his powers are or how he fights because everything is setup for issue #2 where the stuff is going to hit the fan.

SOFT SHADING IN THE ART

Over the years I’ve gotten pretty used to identifying a house style in art. While I may still be a little lost on identifying specific artists, when I see the soft shading and hard inks in a comic I know it is more than likely a Dark Horse book. But that isn’t a knock on the art or the artist, as the character design is really cool in this issue. There are a few times when it looks to me like Douglas Wheatley is referencing photographs, which brings a super realistic quality to the characters.  A lot of this issue involves characters standing around and talking, and though Mr. Wheatley composes each panel expertly, I really want to see what he does when King Tiger takes on a horde of demons in the next issue.

Of all of the characters introduced in Comics’ Greatest World, King Tiger is definitely in the top three. It’s interesting to see a story kind of pick up where it left off 20 years ago, but I really want to see where the creators take this book next. A great deal of this issue is spent catching the new readers up on what is going on as well as setting up the conflict and mystery going forward. Still, this issue is a great example of set up and story bridging and is worth checking out regardless of your history with the character.

A great deal of this issue is spent catching the new readers up on what is going on as well as setting up the conflict and mystery going forward. Still, this issue is a great example of set up and story bridging and is worth checking out regardless of your history with the character.