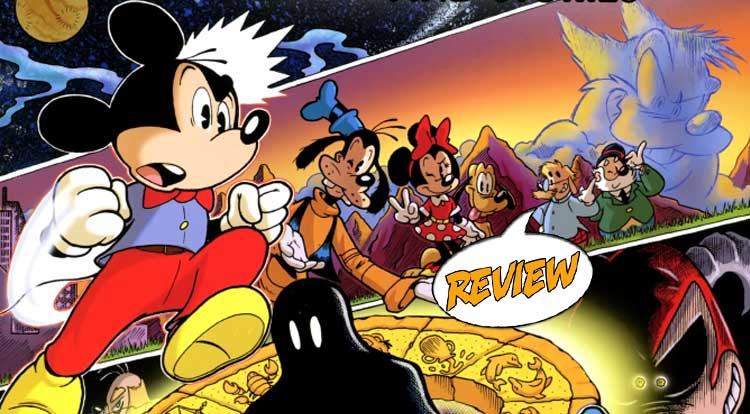 A tradition that began in 1940, and has now outlasted five different publishers…  Your Major Spoilers review of Walt Disney’s Comics And Stories #721 awaits! Previously in Walt Disney’s Comics And Stories:  Originating as a reprint title featuring comic strip adventures of Disney’s biggest stars, WDC&S (as it’s known on the street) ran monthly for decades, outlasting the original publisher, and featuring the work of some of the Disney greats: Carl Barks, Daan Jippes, Floyd Gottfreson and more, including ‘Pogo’ creator Walt Kelly.  Last seen under the Boom! Kids imprint in 2011, the series now returns under the IDW banner…

THEY KEPT THE ORIGINAL NUMBERING!

Maybe I’m old-fashioned, but there’s something alluring about a book that has kept its numbering scheme for decades, something that appeals to me in its stability, but also fitting the material in this issue, culled from some of the best stories in the Disney archives.  As we saw with the revival of Donald Duck a few weeks ago, IDW is taking the time to translate older European stories for the American audience, starting with the first chapter of a time-travel epic buddy comedy, featuring Goofy as his wingman.  I’m unfamiliar with the supernatural/time travel portion of Mickey’s career, but the story works well, playing it straight with a magical historical adventure (and the perfidy of Black Pete.)  Using the entirety of Disney’s back catalogue to their advantage, the creators give us a recolored Sunday strip dating back to the early thirties, before transitioning into the story of Donald Duck running numbers for a bookie…

Donald’s story feels less dated (or perhaps differently dated) than Mickey’s lead story, but it is a done in one, which gives it a slight edge (as well as having an amusing punchline at the end), but that may be my Donald Duck bias talking.  With access to decades of amazing stories, the IDW editors chose their relaunch material very well, and the digital recoloring serves the art very well.  There’s clearly a lot of great stories to choose from, and the text pieces in this issue make it clear that they’re having fun with the material.  We get a lot of questions about what kid-friendly material is available in comics, and this book makes four Disney titles from IDW, any and all of which make for entertaining all-ages reading…

By giving us an ongoing serial in the vein of Tintin, IDW has made a smart decision with this book, and all the strips (including the return of Gremlin Gus written and drawn by Walt Kelly) make for fun reading, and $3.99 for 48 pages makes for a pretty good deal, comic prices being what they are.  Walt Disney’s Comics And Stories #721 is a solid issue, playing on the nostalgia for classic funnybooks while delivering a modern package, earning 3.5 out of 5 stars overall.  I’ll be interested to see if and when they begin generating new content for the Disney titles, but right now the translations of stories never seen in this market are the next best thing…