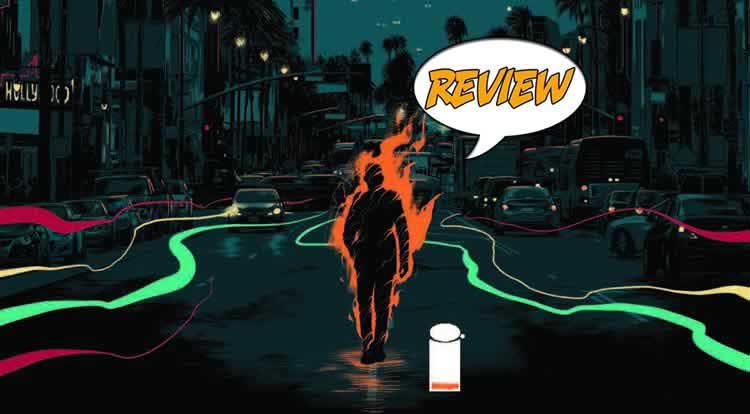 When it comes to supernatural/horror characters, it seems many of them never go out of style. However, certain groups rise up to the forefront, such as vampires. For a while, everywhere you looked, there were vampires. Teen vampires, older vampires, female vampires, even kid vampires.

Now it seems that werewolves are the new vampires. Syfy has their series Bitten, DC’s Vertigo has a great comic Wolf Moon from Cullen Bunn and Jeremy Haun, and now Image has Wolf. What I like about all these is that each one seems to take a different spin on the werewolf legend, and that’s particularly true of this new Image title.

Previously in WOLF: “Bestselling new star writer ALES KOT teams up with white-hot artist MATT TAYLOR and DEADLY CLASS colorist extraordinaire LEE LOUGHRIDGE for an all-new ONGOING SERIES! The crime noir thrills and characters reminiscent of True Detective meet with mythical stakes worthy of Neil Gaiman’s Sandman in this original fantasy/horror/crime saga for mature readers. Antoine Wolfe, a hard-boiled paranormal detective with a death wish, has to cope with sudden responsibility for an orphaned teenage girl who might be the key to the impending apocalypse, California-style. The road to hell and back begins in a MAX-SIZED FIRST ISSUE, with fifty-eight pages of story and no ads!”

The main focus of this comic is Mr. Wolfe, appropriately named although he’s much more than a werewolf. In the first few pages of this debut issue, we see him walking through a neighborhood while he’s on fire. I liked the fact that Wolfe is also African-American, like one of the characters on Bitten. Not only that, he’s hoping to end his life soon, so he’s not your usual comics lead character!

Along the way, he meets several fascinating characters. One is a “street musician” who seems very gifted at hypnosis. “Wolf got your tongue?” the main character asks him. Then he encounters a racist rich man who wants to hire Wolfe to take care of some bad business for him. Wolfe agrees,

But the one that intrigues me most is Freddy Chtonic, a Cthulhu-style friend who has multiple tentacles coming out of what would normally be where his mouth is. Freddy struggles to drink coffee through all those appendages, and he recruits Wolfe to help him with a landlord problem.

The girl mentioned in the summary above appears in various sequences during the book, and she finally meets up with Wolfe near the end of the book, setting up what I expect will be the main storyline in the months to come.

The pacing is a little slow, with a lot of dialogue moving the story forward rather than action or violence, which struck me funny given how many supernatural stories advance.

I think the characterization was the strongest part of this initial issue, but I always like to point out that a first comic is really tough to gauge how things will move forward because we’re really just setting up who is who and what is what. I’m curious to see how the next issue flows.

THE ART HAS A ‘HAWKEYE’ FEEL TO IT

Both the coloring and the drawing really reminded me of Marvel’s Hawkeye. For instance, many of the character’s faces are somewhat simply rendered, with few lines and other distinctive marks on them. In a supernatural book, that’s pretty good because it understates the drama and emotion. When something shocking happens, we really feel it!

There are a lot of subtle color choices, such as pastels in green and yellow working together to provide us with that sense of muted feelings. It works well with the simpler drawing style, again reminiscent of Hawkeye. Guess we’ll see this trend continue for some time to come. It was something special when I first saw it, and although it’s good, it doesn’t have the “sparkle” I felt when I first encountered it. Cool cover, though!

THE BOTTOM LINE: A Good Start to a Supernatural Tale

I always love getting a comic with no (or few) ads in it as well as extra pages. A good, well-told and even longer story appeals to me a lot of the time since a lot of my reading diet consists of monthly issues.

Also, seeing Wolfe have multiple abilities was something I liked. Too often supernatural beings like werewolves are restricted by their legends (or “myths,” as this book refers to them). Seeing the main character having a lot of possibilities in him makes me really interested in what happens next.

It’s also good to see mostly an urban setting for a change. Again, werewolves are largely denizens of the woods and rural surroundings, which is a natural environment for them. But we can already sense that Wolfe’s time in the “big city” has changed his perspectives on a lot of things, including perhaps himself.

I like that I have no idea what will take place next month in the second issue. If you’re like me, that grabs your attention like nothing else! I do hope some more action takes place, though!

This book is a good start and a new spin on werewolves and other supernatural happenings.