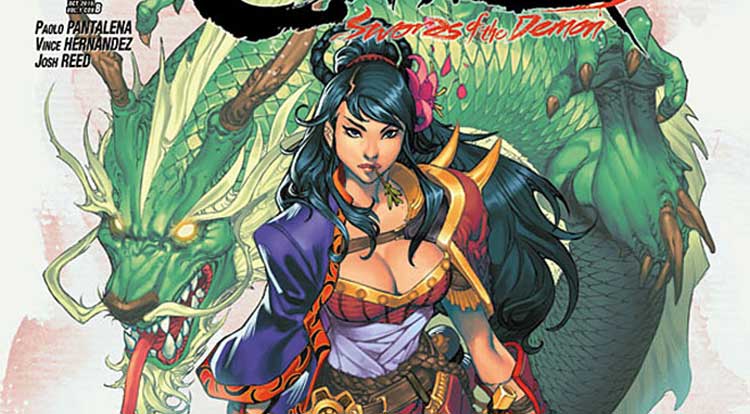 When the actions of her feudal lord begin to lay the seeds of doubt within her, Yukiko, a samurai with exceptional swordplay and even far greater courage, must make a bold decision that forever changes her fate—along with the history of Japan itself! Dorothy Gale slips on her ruby spurs after falling out of the sky and is sent off to follow the Yellow Brick Road to the Emerald City. The only problem is the road is gone! Oz itself has been transformed into a wild west landscape: Flying monkeys and scarecrows still walk the plains of Oz, but in ways you would never have imagined! When Boro leads Ara to a strange new land, she finds a special clue to finding her kidnapped mother—however, will she be able to stay on that path or will another road call out to her?
Creator J.T. Krul, artist V Ken Marion, and colorist Juan Fernandez are proud to present the follow-up volume to Aspen’s smash hit series – JIRNI!

Miya’s secret desire to reconnect with the ghost of her father may spell trouble for her tribe of warriors, and if that wasn’t bad enough, Cassidy and the others find themselves in the crosshairs again! The life of a super hero is one of constant checks and balances, and Critter is feeling the heat from all sides as a rampaging beast tears through town and she runs smack dab into the In Crowd!

Featuring re-mastered content, an exclusive behind-the-scenes look at Critter, creator commentary and more! Don’t miss out on the second of Aspen’s all new BDI launch titles with the return of CRITTER! Elia attempts to discover more of Eries’ past and his reasons for seeking the genocide of the Human race. However, their tenuous encounter could prove to undo the Blue’s existence altogether. Meanwhile, the team puts into motion their plan to extract the Grey Matter from The Rig but run into a fatal flaw in their plan of attack—one that could cost all of them their lives!