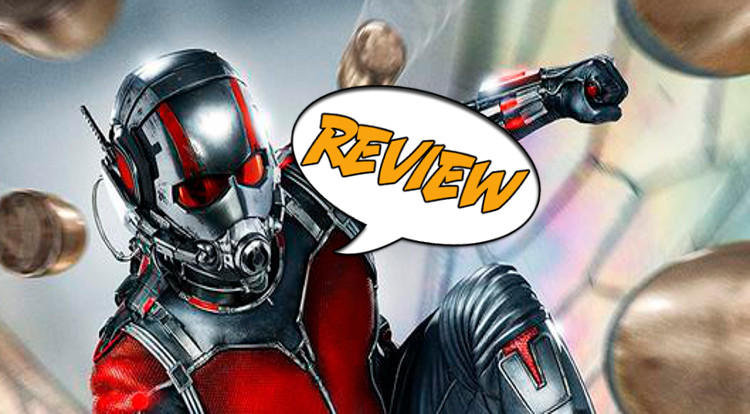 All the big Marvel heroes have gotten their own movie: Iron Man, Captain America, the Incredible Hulk.  Now it’s time for Marvel’s tiniest hero to have his time in the spotlight.  Ant-Man has hit theaters in a big way and Major Spoilers has your review! I was pretty excited when I heard about the Ant-Man movie, especially when Edgar Wright was attached as director.  When he left the project I was extremely doubtful that the movie would be salvaged, especially with the time frame the studio was working with.  Yet, the more I saw of the released footage, the more my doubts went away and the excitement started to come back.  So how was it?  I had a blast despite some minor flaws with the script.

Hank Pym has hidden his Pym Particle technology away from Howard Stark and other large companies interested in using it for military purposes.  His protegé, Darren Cross (Corey Stoll), has developed the technology of his own but is unable to get it to work on organic tissue.  Of course, Cross has made the Yellowjacket suit and is looking to sell it to the highest bidder and its use is…you guessed it, military.  Pym won’t allow this so enter Scott Lang, a thief and all around good guy recently out of prison and not able to catch a break.  Scott and Hank meet, Scott gets trained to be Ant-Man in order to break into Cross’s lab and steal/destroy the Yellowjacket technology.  From there it’s a fun crime-caper movie but of the superhero variety.

I love Scott Lang and was thrilled with the decision to make him the man in the Ant-Man suit instead of Hank Pym.  Scott is a lovable loser, an incredibly smart guy who makes stupid choices and the movie does a perfect job portraying him that way.  Rudd does a great job making Scott likeable and smart, so much so that when he makes dumb decisions he never comes off as stupid.  The chemistry between Scott and his daughter is wonderful and one of the highlights of the film.  The two click and she is a perfect motivator for Scott.  Michael Douglas and Evangeline Lilly do fine jobs but the conflict between them is somewhat predictable.  She’s angry about the death of her mother, Janet Van Dyne, and the secret about her death her father has kept from her.  It comes back to the cliché “I did it to keep you safe” and in all honesty, doesn’t make sense in this context.  There are other cliché’s that have been seen many times before: needing to stop the bad guy from putting technology in the wrong hands, the villain going after the hero’s child, that drag the movie down from what is otherwise an extremely different experience.

There are still great ideas in the script and the movie never completely stumbles.  After hearing Hank Pym’s idea to break into Cross’s building he says  “Ok, why don’t we just call the Avengers?”  It’s a completely legit question and a brilliant way to remind the audience what universe this is set in.  Even better is Pym’s response: “I spent years keeping my tech out of a Stark’s hands, you think I’m going to give to a younger one?” (Not exact quote.  Sorry, it’s late)  He also goes on to explain how his science is more advanced than anything Stark has done, especially the Iron Man suit.  It shows how smart the character is and helps the audience know just how strong Ant-Man’s powers are.  While the script and acting are well done, it’s the fun visuals that make this worth seeing.

A WHOLE NEW, YET FAMILIAR WORLD

When Ant-Man shrinks everything changes and it’s insanely fun to see everyday objects in a new light.  So many clever scenarios pop up like Ant-Man falling on a DJ’s record and him riding with his swarm of ants through gunfire.  The ants are used in various ways, with different types doing different jobs, from swarming together to help Scott cross terrain to carrying tiny explosives.  Action is extremely well done and there are fights that have never really been seen in a movie before.  I won’t spoil too much, but will say that Ant-Man versus a certain flying Avenger is one of the best superhero fights in a Marvel movie ever.  We do get a flashback of Hank and Janet working to stop a missile and it makes me want a movie of the two of them on secret missions stopping Soviets during the Cold War.  The final battle between Ant-Man and Yellowjacket is great as the two hop from large to small, fighting on a plane, in a briefcase (with a wonderful cameo by Siri) and the toy train set seen in the trailer.  Just when I thought I knew where the fight was heading, they threw something new (and large) at me.  I’m very curious to know what was kept from Edgar Wright’s story because there are certainly moments that seem very much in his style. There was a moment where I stopped and thought “This is incredibly silly, but damn is it fun”, which I think sums up the character of Ant-Man pretty well.  I never found the wonder of the world while Ant-Man was small to go away, but I did get the feeling that some in the audience were getting bored at times.  Most of the effects look wonderful but there are unfortunately moments where characters are clearly in front of green screen.  It would have been nice to have seen more practical effects, especially with the ants but it mostly looks fantastic.

Ant-Man is an enjoyable experience with humor and some unique visuals and action.  Paul Rudd does a great job bringing Scott Lang’s character to life while providing some fun wisecracks.  The majority of the visual effects look good and while some of the script is littered with clichés, there’s enough originality to keep the audience entertained.  What I liked best is that it stands on its own and doesn’t feel forced into the Marvel Universe.  Everything seems natural with Ant-Man in his own corner of the cinematic universe and I’d be happy for him to stay own his own.  That probably won’t happen, but how cool would it be to have him just pop up briefly in the other movies, secretly in the background (or small and on the ground) helping out?  He could still have his own films while not needing to be in every Marvel movie.  While he wouldn’t be the strongest Avenger, he’d be the biggest and the best, saving the day without being seen.  One can dream…

Ant-Man is splendid fun with action scenes and visuals that are original and fun. While some of the story is very cliché, it's a blast to watch and never stops being entertaining.