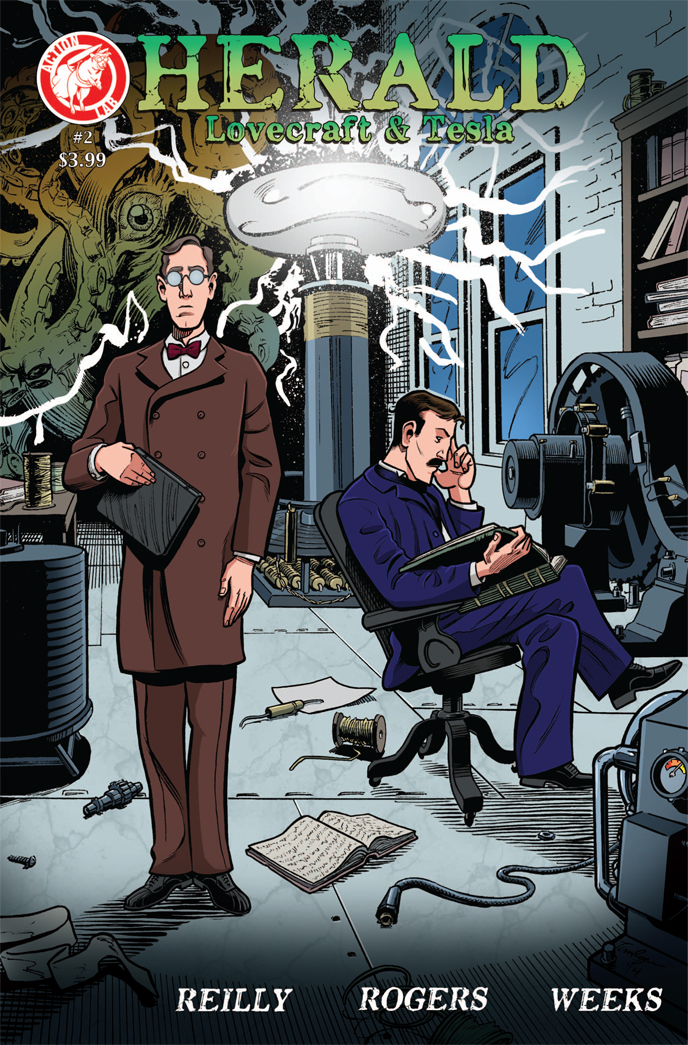 In a partnership with Markerstone Pictures, Romark Entertainment has secured the rights to the critically acclaimed comic book series HERALD.

The series, published by Action Lab Entertainment and created by writer John Reilly, and artists Tom Rogers and Dexter Weeks, tells the story of Nikola Tesla, whose experiments with time travel thrust him ahead in time to the early 1900s, where he must team up with a young H.P. Lovecraft as part of a secretive group combating humanity’s greatest threat, the Cthulu Order. Two sides of the same coin, this contentious pair must navigate a dangerous and forbidden world of frightful secrets, cosmic nightmares, and unspeakable horrors in a quest to save the world. The series, which will interweave the worlds of science and magic, also features appearances by iconic characters such as Albert Einstein, Amelia Earhart and Harry Houdini.

Romark is currently producing “Earthless” alongside Ridley Scott and Brooklyn Weaver at Fox, “Paradox” alongside Tim Kring at Imperative, “Matriarch” alongside Red Wagon for Paramount, and the upcoming television series “Winter” which they are developing with Demarest TV. In June, their Sundance hit “Bound to Vengeance” released in theaters and on VOD from IFC Midnight.

Markerstone setup the thriller “Padre” at Screen Gems, is producing the Irish indie “Brighter Nights” with Fueld Films and is currently gearing up for production on the action/thriller “Backtrace” with Myriad Pictures.

Founded in 2010, Action Lab Entertainment has since launched a number of acclaimed series’, including the Eisner Award nominated series “Priceless” and the comic book reimagining of Charles Band’s 80s cult-classic “Puppet Master.” Known for catering to both family friendly and mature audiences, Action Lab will next launch Actionverse, a ground-breaking crossover series for their library of characters.

Herald writer John Reilly is a writing professor, with a PHD in English and a fondness for all things historical. Artists Dexter Weeks and Tom Rogers have worked on series such as “Avengelyne,” “Koni Waves,” the “Ordinary Days” anthology series and “Calavera de la Justicia”

ABOUT ACTION LAB ENTERTAINMENT- Formed in 2010 with the purpose of pooling their collective talents into a single, powerful entity, the members of Action Lab Entertainment have countless years in multimedia publishing, design, and business. Their first release, Fracture, was successfully funded through Kickstarter and since then they have continued their mission to produce high quality, genre-spanning entertainment. Since its formation, the accolades for A.L.E continue to build on a daily basis. Among its more popular titles are all ages material like the Eisner, Glyph, Shel Dorf Award nominated series PRINCELESS, NFL RUSHZONE (based on the Nickelodeon Television series), Jamal Igle’s MOLLY DANGER, Artist/ Writer Jeremy Dale’s hit series SKYWARD, and Gayle Middleton’s (My Little Pony, The Littlest Pet Shop) monstrously adorable VAMPLETS. Action Lab’s Mature Readers imprint ACTION LAB DANGER ZONE continues to push the envelope of comics entertainment with titles as varied as Charles Band’s PUPPET MASTER and Dan Mendoza’s over the top horror-comedy ZOMBIE TRAMP, THE FINAL PLAGUE and BO, PLUSHY GANGSTA.