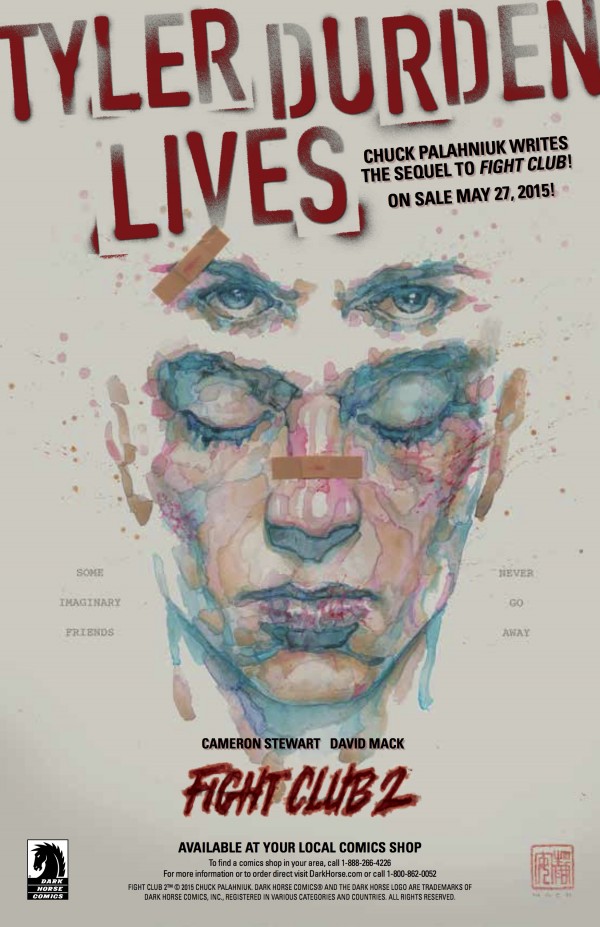 At San Diego Comic Con International, Dark Horse Comics announced today a scratch-and-sniff bookmark contest in support of the acclaimed FIGHT CLUB 2 mini-series, which is written by Chuck Palahniuk, illustrated by Cameron Stewart and colored by Dave Stewart, with covers by David Mack.

Fans present for the FIGHT CLUB 2 panel during which the contest was announced were encouraged to attend dressed as Tyler Durden and Marla Singer. The scratch-and-sniff bookmark contest comes on the heels of Dark Horse Comics’ guerilla marketing efforts on behalf of FIGHT CLUB 2, including encouraging fans to contribute to the series’ mayhem with a guerilla marketing campaign utilizing the phrases “Tyler Durden Lives” and “Rize or Die” in order to win Easton Press limited, leather-bound editions of Palahniuk’s novels BEAUTIFUL YOU, FIGHT CLUB and SURVIVOR.

Dark Horse will also be making a handful of bookmarks available to Diamond registered retailers who simply need to email Bookmark@DarkHorse.com with their name, store name, and Diamond account number to be entered into the contest. Winners will be selected at random and will be notified by Friday, July 17, 2015.

For more details on the Dark Horse Comics FIGHT CLUB 2 scratch-and-sniff bookmark contest, to enter the contest, or to find a comics retailer who has been sent bookmarks by Dark Horse, please visit http://joinProjectMayhem.com/Contest/.