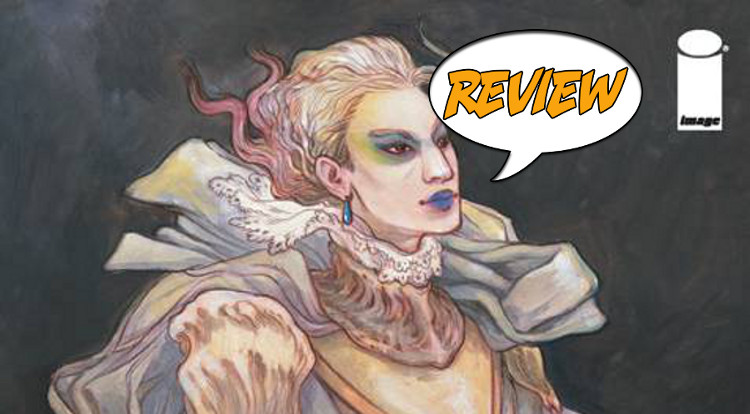 The 8House: Arclight #1 promises genderqueer knights and walking root people, but does it deliver a story? Your Major Spoilers review has the answer to that question. “THE BORDER-EDGE OF THE BLOOD HOUSE LANDS”

As cryptic as its title, 8House: Arclight is a strange comic to dive into. Brandon Graham’s script delivers more atmosphere than it does explanations about the world of 8House. At the border-edge of the blood house lands, Sir Arclight travels with the lady he serves, who walks in the form of a humanoid root creature. The duo engages in some transactions and magic rituals that transform a goose into a bright-red blood creature, though the why of this action is unclear. A return to the city of Cserce-Miasta, “the heart city of the blood house,” hints at some of the character’s motivations. The Lady once inhabited a human body and seeks some way back to it, while Sir Arclight is driven by a fierce loyalty to her. The lack of context is less a bug than a feature of the dreamy story. The solicitation text is much clearer about what happens in the story than Graham’s actual script is. While frustrating for some, the plot is not quite the point. The world that he hints at in the text is fascinatingly fresh, and will engage readers who like exploration. Graham’s mode of storytelling does not appeal to everyone (and it’s not meant to). He excels at evoking strange places that are truly unlike our world, but sometimes the ethereal nature of his scripts drift a little too much. With 8House: Arclight #1, I craved just a little more than Graham felt like dispensing.

“THE LIGHT MADE BY LIVING THINGS”

The sparse script of 8House: Arclight #1 leans on the art to do the heavy lifting. Marian Churchland’s art is reminiscent of the lushly fantastical work of Final Fantasy artist Yoshitaka Amano, although her style is more grounded in thicker line work. Her design for The Lady manages to eke expression and personality from what amounts to a bundle of sticks in a cloak, which is no small task. Churchland uses a sepia-tinted, almost pastel coloring scheme, with bright colors used only on the margins, reserved for the blood parasites and the knightly courtier’s facial makeup. The coloring allows some warmth, but also creates distance in the reader. Overall, the art serves the story’s strengths, while retaining the weaknesses. It is interesting to look at and suggests deeper layers, but also withholds much.

I like the promise that 8House: Archlight #1 shows, but I am also a big fan of Brandon Graham’s work on Multiple Warheads and Prophet. Like those titles, 8House is a bit of a meander through a strange world and your enjoyment will hinge on how much patience you have for unexplained strangeness. Readers who need clearly defined plots and characters or are looking for wham-bam action won’t find it in 8House: Arclight. For those who want their comics to transport them to a different world, 8House: Arclight #1 is one you want to look at. I believe the plan going forward for 8House is to treat it as a shared universe, and that once the first arc is complete, a new set of creators is on board. Graham and Churchland make intriguing, if brief, headway into the world of 8House in this issue, and I trust in their ability to follow through. Check it out.

Pretty as a cloud and perhaps just as hard to grasp. But still fun.