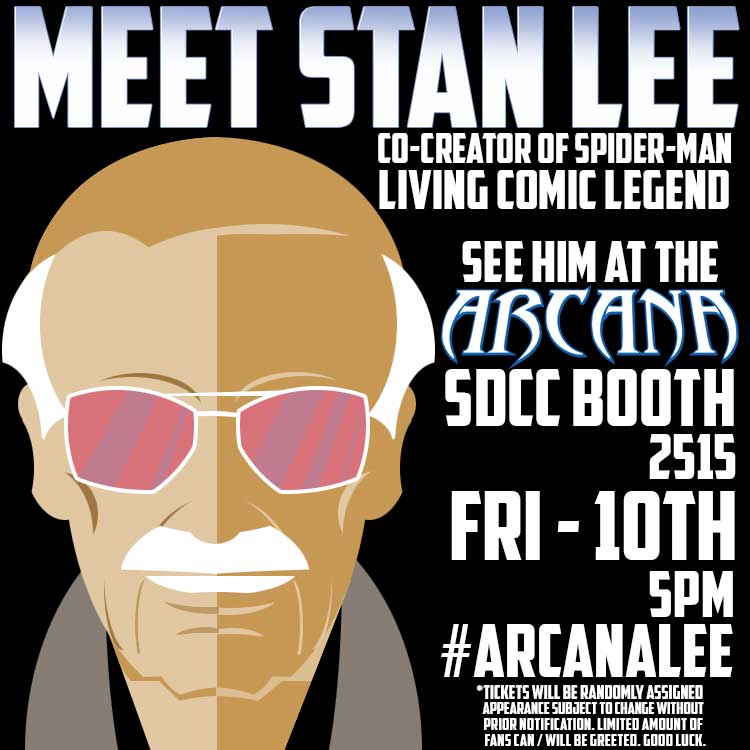 We have the one, the only, the legendary world creator himself STAN “THE MAN” LEE signing at the Arcana booth (2515) on Friday July 10th at 5pm.

Not only will Arcana be at San Diego Comic-Con in a few short days, not ONLY will we be selling exclusive merch from Pixies, Howard Lovecraft and The Steam Engines of Oz, NOT ONLY will we be holding a panel discussing all upcoming films and projects on the Friday … but … the legend will be on hand signing!

“BUT HOW?” you ask, as you shout at your mobile device and/or laptop. Arcana is teamed up with Stan and his company “POW! Entertainment” for his upcoming project Stan Lee’s The Unknowns a brand new world of super-powered teens fighting alien invaders sprouted from the brain of Stan Lee himself and organized by Chris “Doc” Wyatt (Iron Man: Armored Adventures) and our very own CEO and Head Honcho Sean Patrick O’Reilly.

Obviously the co-creator of Spider-Man and walking cameo legend himself has very limited time and we WISH we could let you all shake hands, selfie, and sign to your nerdy heart’s content. However, space is limited for this event so we’re doing things the only fair way we know. By encouraging cross media promotion and assigning rewards at random.

Winners* will be contacted and announced and will get some face time with the Captain of Comics himself. We look forward to seeing you all at the big show!

*Winning is not a guarantee of interaction with Stan Lee. Some conditions may apply. Offer subject to change without notice. Arcana Studio is not responsible for any and all minds lost by interacting with a Comic Book super legend. Legal filler is hard to type. Purple monkey-dishwasher.

About Arcana
Arcana owns one of the world’s largest libraries of graphic novels and comics, with over 250 original intellectual properties, hundreds of graphic novels and a treasure trove of thousands of characters. Arcana’s high quality branded entertainment is filled with characters and stories that transcend gender age, cultural and geographic boundaries. Arcanamation is a full-scale animation studio with the creative and production capabilities to create high-quality branded entertainment with a focus on original content. The next generation of animated feature films and TV series are currently in production, led by a 13 episode series of Kagagi and the theatrically released animated feature film Pixies staring Christopher Plummer on shelves in Walmart on July 14th.