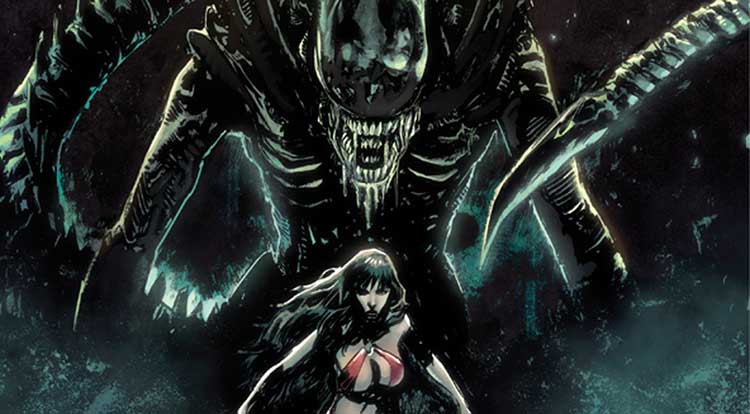 Dynamite Entertainment is proud to announce the full creative team for Aliens / Vampirella, the upcoming horror crossover between their classic comic book heroine an the Xenomorph monsters from Dark Horse Comics’ long-running comic book, based on the renowned film series. Corinna Bechko (Star Wars: Legacy) will steer the series with her scripts, while artist Javier García-Miranda will provide the atmophere and action. Also, artist Gabriel Hardman will provide the distinctive covers worthy of the tradition of horror excellence that both long-standing terror icons represent.

As established in Aliens / Vampirella #1, humans have begun to colonize Mars, but something ancient and sinister got there first. Vampirella, a supernatural exterminator, is faced with a mystery only she can solve… and the bloody realization that some monsters should never be awakened.

Bechko has been writing comics since her horror graphic novel Heathentown was published by Image/Shadowline in 2009. Since then, she has worked for numerous comics publishers including Marvel, DC, Boom, Dark Horse, and Dynamite on titles such as Planet of the Apes, Star Wars: Legacy, Savage Hulk, and Invisible Republic. Her background is in zoology. She lives in Los Angeles with her husband and a small menagerie.

Javier García-Miranda is a relative newcomer to the comic book industry, but has been making waves with his work on several Dynamite horror titles. He has illustrated Aliens / Vampirella’s raven-haired heroine before as part of the anniversary Vampirella #100 celebration. In addition, García-Miranda chronicled the fall and resurrection of Chaos! Comics’ resident bat-winged villainess in the Purgatori miniseries, and worked on Dynamite’s premier bad boy in Evil Ernie (Vol. 2) #6.

“I couldn’t be happier to be teamed with Javier,” says writer Corinna Bechko. “His work has an energy that is necessary for this story, and he’s great at creating a really creepy feel for the scenes that require it. Plus, both his Vampirella and his Xenomorphs are gorgeous.”

Gabriel Hardman, cover artist for the entire Aliens / Vampirella series, is a prolific creator in the comic book industry, plus a frequent contributor to the film industry. A comic book writer and artist, he has worked on such titles as Kinski, Invisible Republic, Star Wars: Legacy, Planet of the Apes, and Savage Hulk. He also served as storyboard artist for the films Inception, Interstellar, Tropic Thunder, and X2.