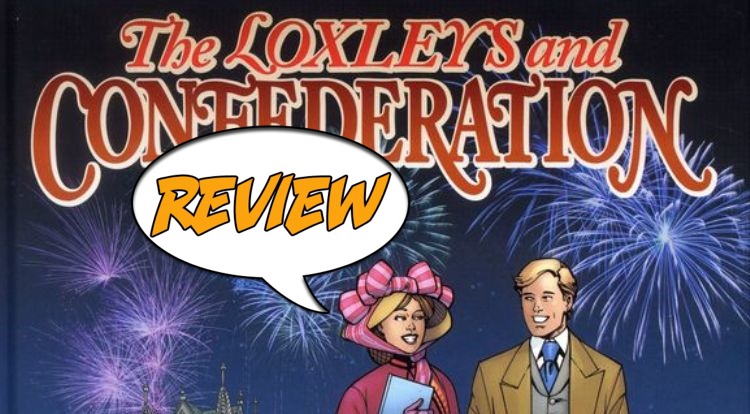 The Loxleys and Confederation TPB Review

This trade is a great one on several levels, but the thing I love most about it is that I, dare I say it, learned a lot. I always appreciate it when I read a book and come away with better knowledge of another people, nation or country. There’s no reason to be scared – this comic spreads understanding in a non-threatening, even fun, way.

I really enjoyed that this was released digitally on July 1, Canada Day! You’ll understand more about this when you read the book!

Previously in THE LOXLEYS AND CONFEDERATION: “From the multiple award-winning creators of The Loxleys and the War of 1812. The story begins in 1864 and for a second time follows the Loxleys, a Canadian family living in the Niagara peninsula. Under the threat once more of an American invasion and the cancellation of the Canadian-American Reciprocity Treaty, the Canadian Colonies look to unite. We follow the Loxleys on their journey to the Charlottetown Conference and witness the events that lead to the Dominion of Canada.”

I’m always interested in how things came to be the way they are. How did people get where they are today? What did they do to become the persons they are now? How did organizations start and blossom into what they are and do today?

One thing I’ve known very little about is our neighbor to the north, Canada. Admittedly, American culture is focused on us, or the U.S., if you want to put it that way. Now, America had a big influence on Canada coming together, and that’s all outlined in this trade paperback. There was a belief in what was called “Manifest Destiny,” that people in the United States were destined to control this entire continent. When the Civil War ended, some folks wanted to continue the North’s successful march, this time into what would become Canada. Naturally, our friends who lived there were horrified at the thought, so they continued the movement to band together, hoping one large country would change the minds of those here in the United States. And it did end up being one of the factors that turned “our” focus away from “them.”

Much like the previous book, The Loxleys and the War of 1812, we readers get to see things from another perspective, and I always find that illuminating. The Americans didn’t win that war, which is one reason there isn’t a lot of interest in it here in the States. In this book, we see how the death of Abraham Lincoln influenced not only “our” history, but in Canada and other places abroad.

I didn’t know what a “Fenian” even was before reading this comic. I find it interesting that this group wanted to take on Great Britain by attacking what was then called “British North America” to gain leverage for the Irish so they could obtain their freedom.

One thing I love about The Loxleys and Confederation is the clear way the script deals with what happened. (Again, I hesitate to use the word “history” since it may drive away some readers.) And it gives us the human perspective by viewing events through the eyes of the Loxley family. I was particularly touched when one of the characters in the book realizes just what the future of this family will be. The tradition of blending one’s maiden name with one’s married name (linked together by a hyphen), such as Smith-Jones, hadn’t even been conceived yet, and without such a thing, an entire family could disappear into the past. Very well done!

I also enjoyed the final pages as just who is telling the story comes into focus. It’s a very strong, human tale that I couldn’t get enough of!

THE ART IS CLEAR AND DYNAMIC

This kind of story has often been told with an “older” art style, dark and rigid. Thankfully, that’s not how things work in this book. Often the artwork shows the changes that take place over time, such as on the main section’s first page. Also, the facial expressions are clear and easily understood as well as telling each person from another.

The folks who created this comic really worked hard to portray everything accurately, such as how buildings looked and the kinds of clothes and hairstyles the various people wore, so we get a very realistic sense of what things were like in the various periods of time being discussed. And it’s not done in a “stuffy” kind of way. Instead, the style is consistent with today’s comics, and that makes it easy for us to get into!

THE BOTTOM LINE: A Powerful Way to Learn More

I think understanding is critical to friendship, and this comic highlights what would eventually become an alliance that would stand the test of time, and tells it all in a very clear and enjoyable way. I believe this book should be in every library across the continent, and maybe even be required reading for students and others interested in knowing more about how the U.S. and Canada have become close allies. It’s great and informative reading!

To get your digital copy of The Loxleys and Confederation, you can go to this link. For a hardcover edition, you can buy it here.

Want to hear more about this book? Be sure to listen to my interview with Mr. Zuehlke during the 172nd episode of my Wayne’s Comics Podcast, here at this link!

The Loxleys and Confederation

Understanding is the basis for friendship, and this book reveals how Canada views several important U.S. events as well as how they became a nation.