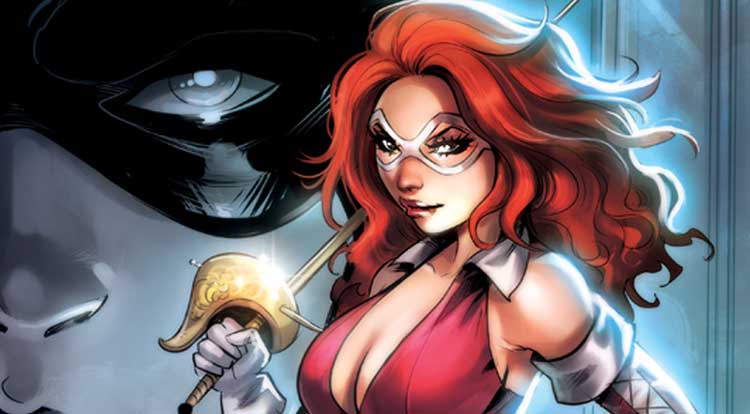 Dynamite Entertainment has announced it is expanding the Swords of Sorrow crossover event with the release of Miss Fury/Lady Rawhide one-shot special. To make the deal even better, a special cosplay variant cover will be available based on the J. Scott Campbell cover from issue #1.

The photograph featured as the Cosplay Edition of Swords of Sorrow #3 was the brainchild of cosplayer Tabitha Lyons, who approached photographer Andrew Dobell of Creative Edge Studios with the idea to reenact the cover to Swords of Sorrow #1, as illustrated by industry superstar J. Scott Campbell. The original cover depicts four stars of the series: Red Sonja and Vampirella (two characters with long traditions of comic book adventuring), as well as literary heroine Dejah Thoris (from the Warlord of Mars novels and comics) and Jana from Frank Cho’s Jungle Girl. The photo reenactment features four lovely cosplayers: Tabitha Lyons as Red Sonja, Tasha Mackenzie as Dejah Thoris, Chiquitita Cosplay as Jungle Girl, and Mojo Jones as Vampirella. Fans and cosplay enthusiasts everywhere can look for this cover edition to hit stores on July 8th. “Any time you get a chance to fulfill a childhood dream of writing comic books, it is of course very exciting,” said writer Mikki Kendal. “To be able to do it as part of the Swords of Sorrow event with such an amazing group of women writers is unreal. When this project first came up, I was afraid to get my hopes up, and I have been pinching myself throughout this process because I get to work with such fabulous writers. Between Gail Simone, Nancy Marguerite Bennett, Leah Moore, Mairghread Scott, Emma Beeby, Nancy A. Collins, and G. Willow Wilson, it’s like a master class in being a woman in comics. I love being able to take a cheesecake character like Lady Rawhide and show her really getting her hands dirty, and taking Miss Fury on a wild ride right alongside her. Getting to play in a shared world and really let my imagination run wild for the story was so much fun. And the villains…you have to really love being able to set up such wonderful conflicts for characters that don’t get as much love as they deserve.”