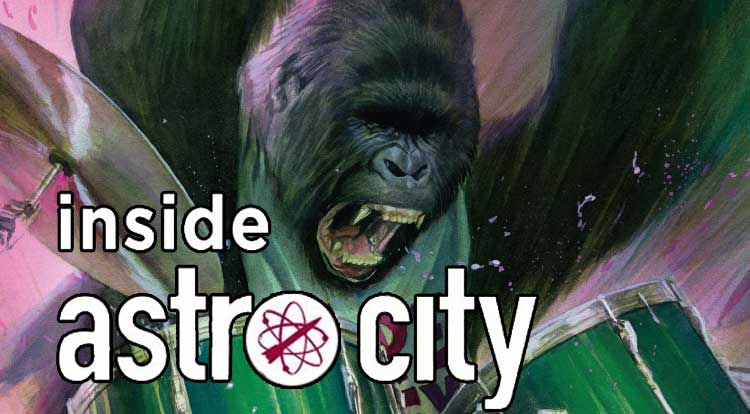 Inside Astro City #24 With Kurt Busiek

Welcome to Inside Astro City, a column focusing on the Vertigo Comics series Astro City from Kurt Busiek, Brent Anderson, and Alex Ross. Each month, we’ll take a look at the current issue of the series, and ask series writer Kurt Busiek questions about the book.  Today, we get the climax of Sticks’ story, so let’s jump right into #24! Astro City #24: It’s hard to be a talking ape in the big bad city. Especially when you set out to be a drummer and became a superhero instead. But will that be enough? Can fame and adventure replace lifelong dreams? Do we even have to ask? Featuring Reflex 6, Samaritan and a few surprises. 1. Last time, you said that Sticks and his story had been outlined and ready for some time, after percolating for years.  Are there a lot of characters in the ‘probably gonna be in Astro City’ portion of your files, just waiting for their big moment in the sun?

Kurt Busiek: There are quite a few, yeah. Some definitely slated for ASTRO CITY, some with a question mark, in that I could use them here or elsewhere. And a lot of story ideas, whether there are new characters attached to them or not, that are tied to existing Astro City characters, like the N-Forcer exposé or the truth about Air Ace. There’s a lot of stuff to get to.

But now that we’re on a monthly schedule, we’re getting to it faster than we used to, at least…!

2. Sticks’ journey over these past two issues has been really engaging, and I especially liked the solution he found to bridge the gap between Gorilla Mountain and his new life.  Is it more difficult to shape a story like his for ‘Astro City’ than for, say, The Avengers or even a different creator-owned work?

KB: I’m not sure I’d be able to tell a story like his in AVENGERS. Well, maybe I could, but it would (a) take a lot longer, and (b) involve a lot more superhero action and fighting, as I wove the plot in and out of traditional action-focused superhero storytelling. And we’d get lots of mail from readers wondering why I couldn’t just use the Beast instead, as if we could tell a story like this with the Beast. And readers unhappy that someone so goofy was showing up at all, much less for an extended period.

The advantage I have in ASTRO CITY is that I can just tell Sticks’s story. I don’t have to fit it an and around an ongoing First Family story or Reflex 6 or whatever. I focus on what needs to be told, tell it cleanly, and when I’m done we go on to something else. The spotlight is on the story at hand, rather than whichever hero or team is in the logo.

As for another creator-owned work, I don’t know how that would even work. It would depend on what the series was, I guess, and what kind of stories it showcased. 3. This issue really shows us a downside of super-heroics, as Sticks finds himself repeatedly targeted by villains, even when not in his super-identity.  Astro City as a narrative has been really good about showing the sometimes-terrible ramifications of living in a super-world, have you ever had to pull back on certain elements for fear of getting too dark or negative?

KB: Not really. I’m a generally-positive guy by nature, so I don’t find the stories push me to do something really ghastly or nasty. Maybe if someone else was writing them…but then, that wouldn’t be my problem, it’s be theirs. And it’s not going to happen, so it’s not really an issue. We go as dark (or as sunny) as the story seems to need — I don’t want to make it feel like it’s unremitting horror to live in this kind of world, but at the same time I don’t want it to seem like there’s no difference.

So I go where my instincts take me, and this is the result. 4. This issue spends some time on the process of superhero branding/naming, with a number of possible aliases raised for Sticks, including ‘Monkey C” and “Ape-X”.  Some are brilliant, others… not so much.  Were these created just for the issue, or were these actual alternate ideas for his super-heroic aliases?

KB: No, we never seriously considered any of them as superhero codenames for him. If we had, I’d have worked harder and come up with something better than those.

Actually, Ape-X isn’t awful, but I think Mark Gruenwald used it in SQUADRON SUPREME. I used Gorilla X in a SILVER STAR mini-series I did for Topps years ago, but I don’t think his name ever made it into print.

5. Kudos on one of the best new super-identities in years with the creation of “Tuxedo Gorilla.”  I was actually surprised that no one had ever used that one before.  Would you ever consider a solo series featuring him (or any of the KBAC cast?)

KB: You were surprised no one’s ever used “Tuxedo Gorilla” before? What’s wrong with you?

(MP: We don’t have nearly enough room to go over that…)

But no, I don’t think a TUXEDO GORILLA solo series is in the cards, or really, any solo ASTRO CITY series. We can do anything we want in the regular book already, so the only reason to do spinoffs would be if we were just producing stories so fast that one monthly series couldn’t hold them all. And trust me, that hasn’t ever been anything we’ve had to deal with. The Usual Bonus Question: What cool things should we look forward to in #25?

KB: Another guest-artist issue, as Jesús “The Hammer” Merino returns for a story all about Hummingbird, co-starring all of the female members of Honor Guard. It reveals her origin, faces her with a crisis, features gods, hidden cities, an evil scarecrow, giant sea turtles, outer space and more! Oh yeah, and cats.