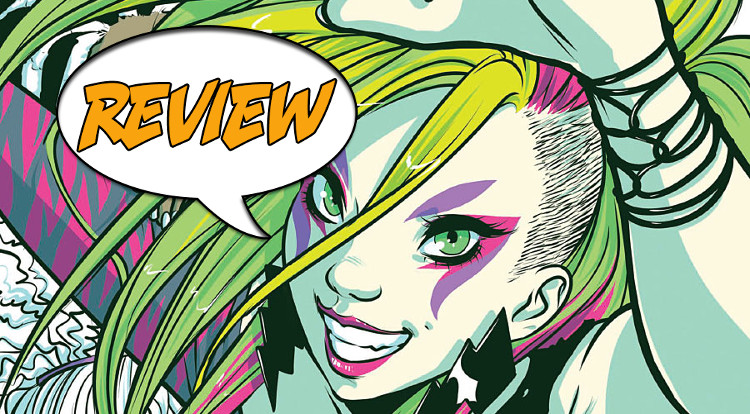 Jem and the Holograms #4 Review

As a child of the 80’s, there are a few staples in my life:  Transformers, He-Man, G.I. Joe and Jem and the Holograms.  Jem may seem out-of-place amongst the male oriented properties but I found it fascinating.  There are many fond memories of sitting down and watching Jem, Kimber, Shana and Aja rock out while also dealing with threats from rival band “The Misfits”.  The Jem and the Holograms comic from IDW has done a brilliant job updating the story for modern audiences while remaining true to its roots.  How do Jem and the Holograms fare in issue four?  Read the Major Spoilers review and find out! Previously in Jem and the Holograms:  After becoming an internet hit with their new song, Jem and the Holograms are gearing up to play a benefit show at the Starlight Foundation.  The Misfits, a popular band preparing for an upcoming battle of the bands, are not taking the new competition well.  Add on Jerrica’s stage fright, Kimber’s crush on Stormer and a plan to sabotage the Hologram’s show, things become really hectic.

This reboot/relaunch comic of Jem and the Holograms from IDW has been extremely underrated.  It brilliantly updates its characters and story for modern-day audiences while appealing to readers of all kinds.  This isn’t the girly girl book that many may think it to be.  There are certainly melodramatic “teen” moments and story elements such as Jerrica and Rio’s romance and a whole social media angle keeps it youthful.  What I’ve enjoyed are the rock and roll elements and the storytelling that spins out from being in a band with friends.  This issue focuses more on the drama but it’s still fun and there are some shining moments.  One of my favorite changes this book has done is making Kimber a lesbian.  It’s a character trait that is realistic plus the story never goes out of its way to point her sexual preferences out.  Kimber and rival band member Stormer’s first meeting didn’t go well.  The two meet up again in private and they clearly have a connection.  I liked Stormer’s conflicting emotions with her and Kimber’s relationship and her loyalty to The Misfits.  She is afraid that the Misfits are on the verge of kicking her out, only keeping her because she’s the one who writes the songs.  As a former member of a band (in my better, younger years) I found this rang true.  I wrote many of the songs and was in a similar situation, so seeing this rang true.  The rest of the issue focuses on Rio and Jerrica as the rest of the band members prepare for the show.  It’s well written but I find it the most boring part of the book but I’m not the audience for this particular plot element.  The cliffhanger is a good one and it will be fun to see how Jem and the Holograms will salvage their show after having it sabotaged.  If there is one complaint I have it’s that Jem has hardly made an appearance in the book.  Even if she is a hologram, it would be nice to see Jerrica as her alter ego more, especially since she is the title character.

THE COLOR OF MUSIC

The strongest part of Jem and the Holograms is Sophie Campbell’s art and M. Victoria Robado’s coloring.  When I think of Jem I remember the bright eighties colors and lighting.  Campbell and Robado emulate that look, making fun and extremely vibrant art.  Every single page pops off the page and looks gorgeous.  Campbell has updated each character uniquely and gives each woman a realistic body type.  Not all are skinny, big breasted pop stars but instead normal proportioned, realistic body types.  Campbell illustrates the bands performing in a visually stunning way, with the words swirling around the members as they play and is elevated with Robado’s striking colors.  A big drawback to the art is the immense amount of missing backgrounds.  Almost every panel has nothing behind the characters, instead filled with a bright neon color or left white.  While the color stays true to the vibe the book has, it’s disappointing considering how good Sophie Campbell’s art looks.  Rio’s appearance bothers me and he looks…odd; too much a “pretty boy” and it just doesn’t sit well.  Regardless, this book is a treat to look at and represents Jem and the Holograms perfectly.

Jem and the Holograms continues to be a fun book that has modernized the cartoon while giving the nostalgic reader something to latch on to.  I love the story, especially parts concerning the interaction between bands, and the artwork and coloring are stunning.  Jem caters to a certain audiences but I argue that there is something here for fans of all types.  This issue has a bit too much drama but promises to up the ante with next issue.  I’ve enjoyed this reboot of Jem and the Holograms and think Kelly Thompson and Sophie Campbell are hitting the high notes.

Jem and the Holograms #4

Jem and the Holograms #4 continues to be a fun, modern update of the classic cartoon. While there are some issues with the story, it's enjoyable and appeals to all audience types.