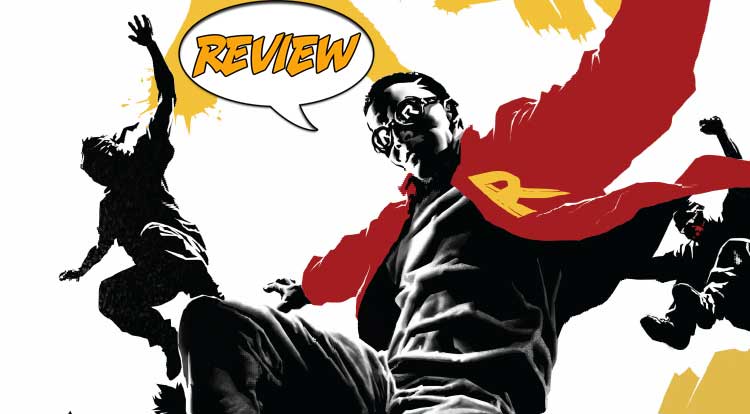 We Are Robin #1 Review

They’re not sidekicks…  They’re an ARMY.  Your Major Spoilers review of We Are Robin #1 awaits! Previously in We Are Robin: Dick Grayson, Jason Todd, Tim Drake, Stephanie Brown (allegedly) and Damian Wayne have all been Robins, as well as a few other hangers-on, alternate universe versions and the occasional stand-in.  But what happens when Robin is less one kid, and more an entire movement?

We open in the mean streets of Gotham City, with a charming young man named Duke Thomas being accosted by a group of young men due to Duke making time with one of their sisters.  Things quickly escalate and we find that Duke is quite skilled as an acrobat and a fighter, but sheer numbers end up working against him.  Worse still, once he’s released into the custody of Doctor Leslie Thompkins (a familiar name for Batman fans) Duke finds that this latest fight has cost him his temporary foster home.  His parents are still missing after the effects of ‘Endgame’ on Gotham City, with Leslie reminding him that they could be lost, or injured, or just part of the herd of Joker Venom-addled victims wandering the streets.  Duke isn’t interested in hearing excuses, and leaves the new home she arranges as quickly as he arrives, slipping off into the sewers to find his parents, instead finding a madman ranting to his army of addled followers, another fight, and a save by four mysterious folks in familiar-looking red-accented attire.

BUT WHO IS THAT IN THE SHADOWS?

The issue ends with a mysterious someone in the shadows watching the proceedings on CCTV cameras, with a dramatic reveal of a room FULL of uniforms, utility belts, weapons and helmets, all bearing Robin sigils and the red of his costume.  Duke’s saviors (there are five of them, and throughout the issue, we see them texting back-and-forth to one another) are unidentified here, but they don’t SEEM to be any of the previous Robins, at least as far as I can tell.  Having not read all of ‘Endgame’, I don’t know if we’re supposed to know them, if there are clues to the hidden Robin-Master in previous issues, or if I’m supposed to already have picked up on all of this.  From an art perspective, it’s a very interesting issue, reminding me of the work of Freddie Williams II (whose last book, ‘The Movement’, shares some thematic similarities with this one) in all the right ways, with a unique angularity that reminds me of the Aeon Flux cartoons.  All the fight sequences are well-executed, and while faces are a little hard to differentiate at this point, the expressions he delivers are great, as well.

THE BOTTOM LINE: A LITTLE TOO MYSTERIOUS

My biggest complaint about this book comes in the combined execution of story and art: Either there has been build-up to this in other Bat-books that would help to shine some light on the who and why of this group of people (which would bother me, as I don’t like having to collect multiple titles to make one coherent) or it’s all meant to be a big mystery, in which case this issue plays its cards TOO close to the vest.  I certainly want to know more about these Robins, but I feel like this issue could have given me a little bit more to go on as to their identities and motivations.  That said, a book that leaves you wanting more at the end is at least a qualified success, and We Are Robin #1 is a book with much potential and a charismatic central character, earning 3 out of 5 stars overall.  I will be watching this one closely, I just hope they don’t drag things out for TOO long and make any reveals fall flat (what is known as the classic “Lost Dilemma.”)