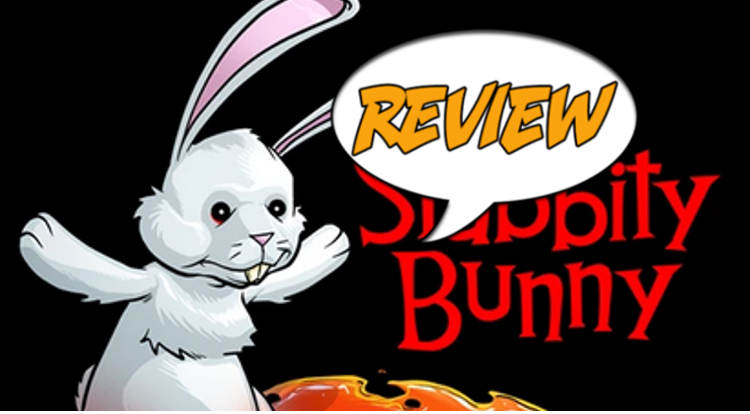 First things first! FULL DISCLOSURE: I did help by working as an editor on this book, making sure that all the commas were in the right places and such. And the creator of this comic is a close friend of mine. But the following review will focus on the parts that I did NOT work on, including the plot, the art and the coloring. Previously in Stabbity Bunny:  “An ancient evil will overwhelm the town of Holiday, Vermont, unless Grace, a brave 7 year-old, and her plush rabbit can stop it.”

I’m always happy to help out people trying to create an excellent comic. This isn’t the first comic that I’ve done some editing for, and I doubt it will be the last. But I really loved the concept of really good people versus really bad ones in a smaller town unused to facing evil.  That’s why the basic pitch for Stabbity Bunny is “a modern day Leave It To Beaver meets Nightmare on Elm Street.”

This is Richard’s first published comic, but his writing doesn’t feel like that at all. The pacing is quick and the characters believable. He also has written 100 years of back story that he uses to give the book a cogent feeling of having a well-chosen goal in mind as well as clearly defined situations and inhabitants of the town.

Although it is the debut of the first in three 12-issue miniseries’ about a young girl, it’s not necessarily one children that age should read. it’s estimated that the youngest who should read the book should be a  mature 10 years of age. That has a lot to do with this initial outing focusing on 7-year-old Grace facing what is likely for any kid a terrifying situation — being abducted.

When the second miniseries begins, Grace will be 12 years old, then in the last miniseries she’ll be 17 years of age. I’m looking forward to seeing her mature as she faces ever-increasing evil over her lifetime. There will be a lot of surprises from issue to issue, but each book, like this issue, will wrap up important story points while the over-arching tale will continue.

Oh, and the title of the book comes from what Grace calls her plush bunny. But we’ll find out more about that in the issues to come.

A STRONG ART THAT IN SOME WAYS COMPLIMENTS THE STORY, BUT CONTRASTS IT AS WELL

Dwayne Biddix is an artist who has completed many projects in his career, including everything from designing graphics for Topps cards to developing excellent posters and t-shirts. He wants to work in animation, and that accounts for the style he uses in this book, his return to independent comics after a brief hiatus.

It’s fascinating to me that the animated style on some levels works with the darker story while on other levels has a lighter appearance than I expected. It makes the horror aspects of the book really stand out because it’s NOT told with a realistic art approach.

As he works on the series, I’m sure that as great as his current artwork is, it will grow as he continues to master sequential art and his ability to portray character expressions. He’s improving his craft via classes and through the help of mentors. I think we’ll see Dwayne’s name in great comics for years to come!

I’d be remiss if I didn’t say how great I think Ms. Buenaventura’s coloring is! She adds layers to Mr. Biddix’s art that really made the story sing! They make a great team, and I can’t wait for the issue #2!

BOTTOM LINE: A COMIC THAT’S AS ORIGINAL AS IT IS ENGAGING

I’ve often said that I love variety in my reading diet. I think Stabbity Bunny is ideal for those of us longing to dive into something different, something original. There are no longjohns heroes to be found, but from what I’ve seen, there will be everyday people who will rise to the challenge of taking on evil in whatever forms they discover. If you like characters who breathe as well as plot twists and turns that shock and surprise.

To get your copy of Stabbity Bunny #1 as well as a variety of merchandise (including t-shirts, stickers and posters), go to the book’s website at this link. Also, many of these items can be found in the current Kickstarter project that’s raising funds to bring the second issue of this series to reality. This project will conclude on Thursday, July 2, at 7:00 p.m. EDT. If you can help add more originality to today’s comics, I’d recommend you support Stabbity Bunny!

Stabbity Bunny is a comic that goes where no bunny has gone before!