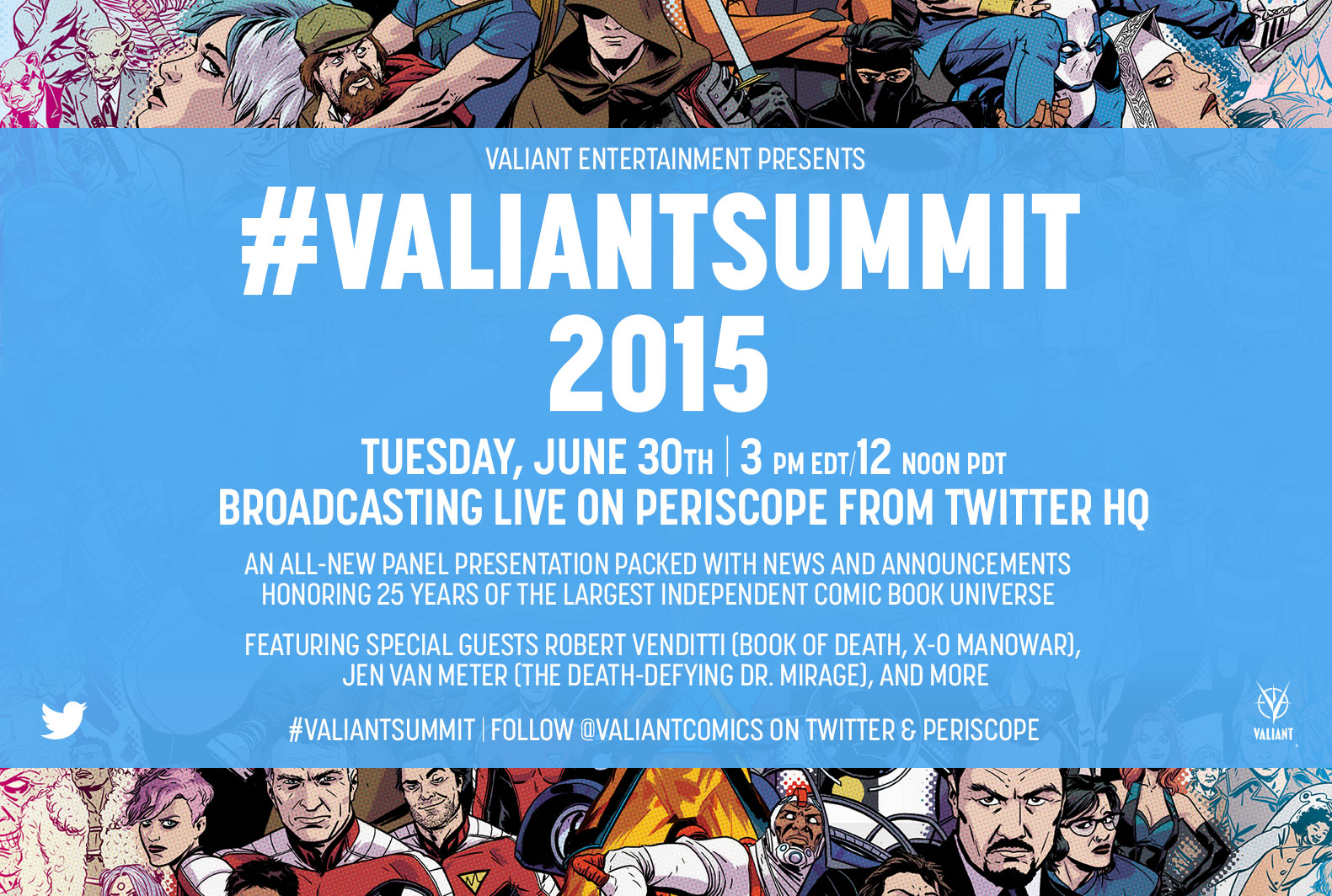 [Conventions] Valiant and Twitter to stream #ValiantSummit live on Periscope

In honor of Valiant’s 25th anniversary, Valiant and Twitter are teaming for an exclusive panel celebrating 25 years of the largest independent superhero universe in comics with news, announcements, and more!

New to Valiant comics? Then start here with a round of Valiant 101 as the #ValiantSummit panel presents a comprehensive introduction to Valiant’s groundbreaking superhero universe and the origins of its greatest heroes, including X-O Manowar, Bloodshot, Ninjak, Divinity, and more. Then, the first official #ValiantSummit continues with revelations about the publisher’s upcoming BOOK OF DEATH summer event series by New York Times best-selling writer Robert Venditti and artists Robert Gill and Doug Braithwaite; exclusive first word on upcoming series and special events coming in late 2015 and beyond; and questions and answers, live from fans around the world submitted via Twitter.

Tune in live to witness this unprecedented comics milestone live from Twitter headquarters on Tuesday, June 30th at 3 pm EDT/12 noon PDT on the Periscope app at @ValiantComics! Join the conversation on Twitter and submit your questions for Valiant’s all-star panel of guests now using the #ValiantSummit hashtag.

Periscope is a live video streaming app for iOS and Android. Simply download the Periscope app, create a new user log-in or use your Twitter log-in credentials, and visit @ValiantComics to watch the #ValiantSummit panel presentation live from San Francisco.

Celebrating its 25th anniversary in 2015, Valiant is one of the most successful comic book publishing companies in the history of the medium with more than 81 million comics sold and a library of more than 2,000 distinct characters, including X-O Manowar, Bloodshot, Harbinger, Shadowman, Archer & Armstrong, and many more. Established by a brain trust of legendary comics creators – including former Marvel Editor-in-Chief Jim Shooter; seminal Iron Man writer and artist, Bob Layton; and the visionary writer and illustrator of Wolverine: Weapon X, Barry Windsor-Smith – Valiant’s heroes and villains inhabit the largest independently owned superhero universe anywhere in comics. In recent years the company has returned to great commercial and critical success, winning a Diamond Gem Award for Publisher of the Year and numerous industry awards and accolades. Valiant’s titles consistently rate among the best reviewed in comics.

In 2015, Valiant announced that it partnered with Sony Pictures and Original Film to bring two of the publisher’s most acclaimed superhero franchises – BLOODSHOT and HARBINGER – to the big screen over the course of five feature films that will culminate with the shared universe crossover film, HARBINGER WARS. BLOODSHOT, arriving in theaters in 2017, will kick off the five-picture plan leading to HARBINGER WARS and will be directed by David Leitch & Chad Stahelski (John Wick). Neal H. Moritz and Toby Jaffe of Original Film (The Fast and the Furious franchise) and Valiant Entertainment will produce the film.