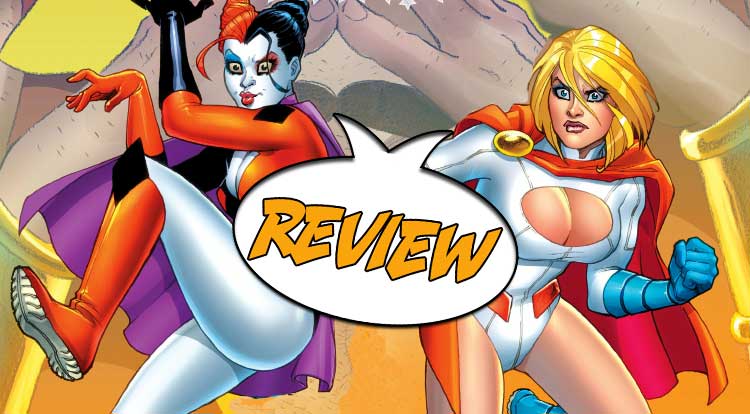 Spinning out of her own series, Harley Quinn and an amnesiac Power Girl have (thanks to a few lies on Harley’s part) become a time-and-space-traveling super-team.  There’s no possible way that this can end well…  Your Major Spoilers review of Harley Quinn And Power Girl #1 awaits! Previously in Harley Quinn And Power Girl: So, Harley Quinn discovered an amnesiac Power Girl on the beach at Coney Island and convinced her that the two of them were a super-team, caped crusaders of the highest order.  They beat up on minor criminals and were transported into space to face a would-be conqueror known as Manos, teleporting home and immediately getting chucked into another teleportation ring and sent into deep space…

Spinning out of Harley’s own title, our heroines are thrown into the middle of a strange space adventure, stopping only briefly to vomit on Mister Mind as they go.  (It’s that kind of book.)  Interestingly, the issue has to take a little time to explain which Power Girl we’re dealing with, given that the PG who has been around since the 2011 Flashpoint retcon has returned to her homeworld of Earth-2 and taken to wearing a Superman shield.  This, it seems, is the same Power Girl that Conner and Palmiotti wrote about pre-Flashpoint, though her memories are gone, as our dynamic duo finds themselves on the planet Valeron, home of Vartox, Power Girl’s would-be suitor.  He has been captured by a villainous galactic overlord who wants to wipe out all hedonism, while Harley Quinn just seems to enjoy chaos and ultra-violence, including murdering a judgy underling who claims that her uniform resembles that of a prostitute.  Power Girl spends most of the issue playing straight-woman to Harley’s antics, which is a little bit limiting for her, but all in all, the build-up to the final page cliffhanger (Harley and Kara facing down an armed alien armada) is a lot of fun.

The use of Vartox leads to a lot of the issue’s humor, including his majordomo Groovicus Mellow, but the art is pretty well-done as well.  Stephane Roux does a good job with most of the action, but some pages feel a bit sketchy/unfinished, especially in the realm of facial expressions.  There is some fun character work to be had, and the interplay of the main characters is fun, but not a lot actually happens in this issue, and the repeated use of teleportation devices in this story and the one leading up to it makes for a little confusion on the part of the reader, but mostly this series is a throwback to the fun of Power Girl’s last solo book in some very good ways.  The appearance of a floating robot head ala Vortox’s inspiration, the movie ‘Zardoz’ is the tip of the visual pun iceberg, and Harley’s adoption of a costume that parallels Power Girl’s provides her with a better suit that the booty-shorts and corset costume she’s been rocking in recent months of the New 52.

THE BOTTOM LINE: FUN, IN A WEIRD WAY

In short, this issue is a breezy, fun bit of entertainment, with a lot of unanswered questions to fill in as we go.  Harley Quinn And Power Girl #1 makes for a fun read, and even with some wobbles on the art and a little bit of heavy lifting on the matter of Power Girl’s identity, earns a more than solid 3 out of 5 stars overall.  I’m really happy to see Palmiotti and Conner (and Gray) back on Kara’s adventures, and while I’m not always a fan of modern Harley stories, they make her work as well…

A lot of setup, but some fun character work and the promise of future Vartox/Power Girl interactions, which are pure gold.