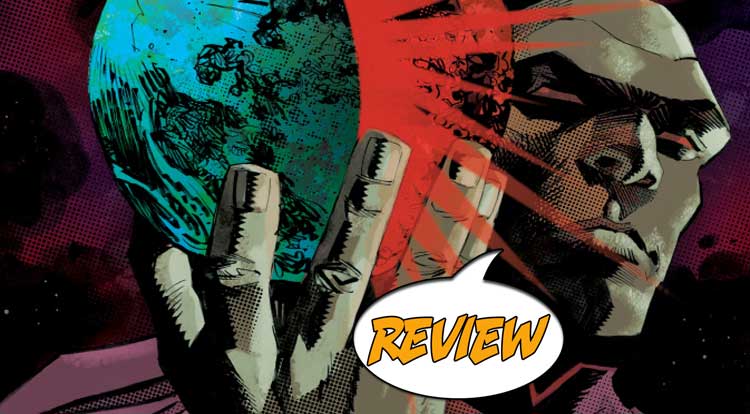 His status as founding member of the Justice League Of America has been stripped from continuity, but you can’t count J’onn J’onnz out just yet.  How does his first solo adventure of the DCYou fare?  Your Major Spoilers review of Martian Manhunter #1 awaits! Previously in Martian Manhunter: In the Pre-Flashpoint continuity, J’onn J’onnz was a lawkeeper on planet Mars before Dr. Saul Erdel’s communications device accidentally teleported him to Earth.  As a shape-shifter, he was able to go undercover among the humans, even taking a job as a detective in a major metropolitan police force, and joining the Justice League as a founding member.  After Flashpoint, he’s been a much more elusive figure, joining both the JLA and Stormwatch in some capacity, leaving both teams under a cloud of suspicion and violence, leading us to ask a very important question:

Who is the Martian Manhunter these days, anyway?

EVERYTHING WE KNOW IS WRONG

There’s a rule in the DC Universe: Whenever we relaunch/revamp/reboot, it comes with a title for the Martian Manhunter.  After the Crisis, he got his entire origin revamped, while Zero Hour led to J’onn’s longest ongoing series to date.  After 52, he got 8 issues, while the Flashpoint paradox threw him in several different books, notably Stormwatch, while making his nature and mission much darker.  This issue opens with a very disturbing scene, in which a little girl approaches a strange misshapen figure wearing a sign that reads “Mister Biscuits: Only wake in case of emergency.”  The creature interacts with her (kind of adorably, pulling a coin from behind her ear in avuncular fashion) before she asks him if he’s good.  “I don’t know,” replies the strange, green bug-eyed creature.  At the same time, the Martian Manhunter is in the middle of an emergency situation, telepathically warning everyone on the planet about the coming troubles, while saving a crashing airliner in a textbook example of superhero power.

THE EPIPHANY HAS COME

‘Course, he does it by transforming into a giant dragon and pulling it up with his claws, but it becomes clear that there’s more going on than one superhero, even one with as many powers as J’onn has, to handle all alone.  It’s clear that the Martians have arrived, but that the battle is going to be a bloody one, even by DCU standards.  The art this issue is really well handled, with a number of amorphous monstrosities (including the titular hero) glorping all over the place, the truly frightening sight of ‘Mister Biscuits’ sitting in his abandoned building, and cameos by three member of the Justice League, all of whom look really great under Eddy Barrows pencil.  The story isn’t quite as good for me, with a lot of the threat unspoken, and some difficulties in understanding the transition between voice-over captions and telepathic broadcasts in the first read-through.  The issue ends with the Martian Manhunter asking a NASA scientist to kill him, while Mister Biscuits sits in his dark room eating… horribly.  I’m not sure what’s actually going on here, but I’m worried that we’re going to get another “evil alien has to overcome his monstrous programming” story, something we’ve seen several times with Martian Manhunter already.  I’m willing to give this book some time to get its feet under it, but I’ll be more interested in what happens AFTER we’ve dealt with the menace of The Epiphany and perhaps get to see J’onn establish a life other than as warrior.

THE BOTTOM LINE: DISTURBING BUT INTRIGUING

I’m always interested in a Martian Manhunter comic, especially one full of shape-shifting and telepathic mayhem, but the beginning of this story seems oddly familiar to someone who has been reading J’onn’s adventures since the early 80s.  Still, this is a whole new universe, with a whole new take on continuity, and the Manhunter’s new alieny-alien battle-skirt look is strong, and the art really spotlights that, and depending on HOW it’s executed, even a familiar story can be a good one (witness Star Wars.)  All in all, Martian Manhunter #1 is a pretty good read, with creative and well-executed art making up for any shortfalls in story, earning 3 out of 5 stars overall.  I’m looking forward to seeing where this is going…

Kind of dark and unnerving (and not all in a good way) with interesting art to be head.