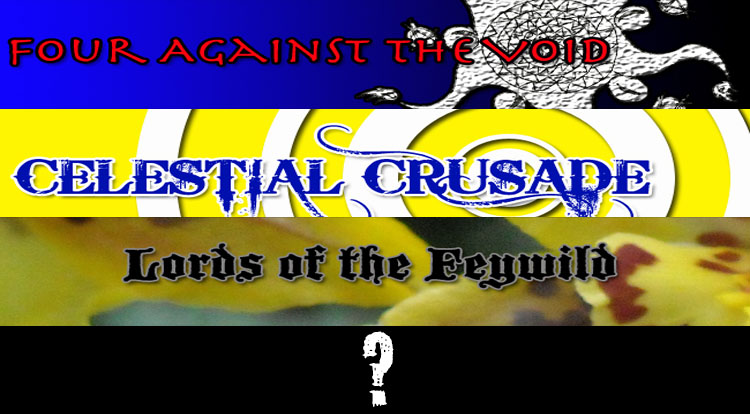 This is the banner for the second season

(The first season was just the first handful of episodes which we just call the pilot season. Although storywise it’s still part of the Four Against the Void arch.)

So that’s cool, but did you know that weird monster in the banner actually means something? This is the symbol the void cultists use to worship the five super-entities of the void:

The Monarch in Saffron Rags; She Who Slumbers in Agony; The Hidden Heart of the Ocean; Oggem, The Absence of Center; and Yemne, That Which Calls to the Silence. SPOOKY TIMES!

This is the banner for Season 3:

What do you notice about it? If you said “there are those rings behind the text” then you are very observant, better sit out the next few questions so the class doesn’t think you’re the teacher’s pet. Yes, the rings represent the orbits of the holy cities of the Astral Sea. Good work, you’re so smart.

You guys remember this one, right?

This one’s a little more philosophical, when I made it I wanted to hint at a dark core inside the bright weirdness of the feywild.

Which brings us to Season 5’s banner:

Oooh… spooky! What does it mean, though? Use the comment section to theorize.