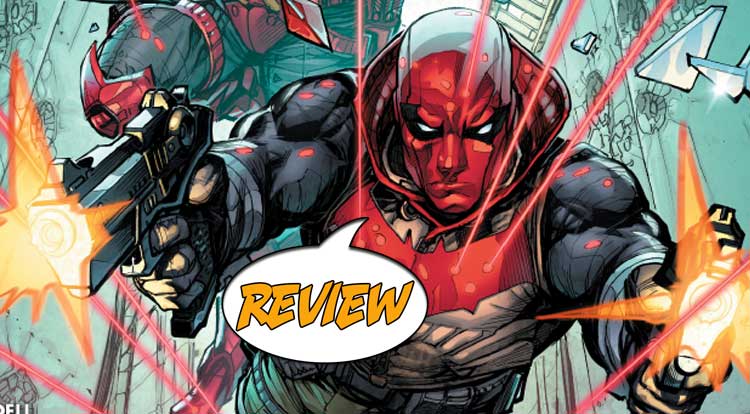 The Outlaws are no more. What has become of Jason Todd and Roy Harper in the post-Convergence DCYou? Your Major Spoilers review of Red Hood/Arsenal #1 awaits!

Previously in Red Hood/Arsenal: The Red Hood, Arsenal and Starfire were the Outlaws, teaming up to deal with matters both personal and not-so-much, always three, acting as one.  Now, Starfire has returned to Earth to have adventures of her own in Florida, but what has happened to her partners in crime?

As our story opens, Roy “Arsenal” Harper is on a one-man stake out in the desert, watching a mysterious transaction, missing his former partners as he tries to keep the worst from happening.  He even steps in an tries to stop the government agent in charge from going through with what turns out to be a prisoner exchange, failing miserably with diplomacy and stepping in with violence.  Things turn from bad to worse, a giant superhuman-type arrives, and the prisoner is shot in the back multiple times.  It’s actually a pretty impressive showing from Roy, whose new costume has interesting wrist pieces and greaves that resemble the fletching of an arrow, and a black-and-red color scheme that I really enjoy.  Of course, nothing is quite what it seems, and the inevitable arrival of the Red Hood proves to be the final step in pulling the operation out of the proverbial fire.  Jason and Roy bicker like an old married couple, and at the end of the issue, they’re given the option to continue their partnership as government contractors, a proposition Roy is all for, and Jason thinks is ridiculous.

ENOUGH WITH THE BALL CAP ALREADY!

There are a couple of downsides to this issue, though: Lobdell’s script gives us the possibility of a big change in our heroes’ lives, but the last page post-script seems to imply that this may be more of the same bickery fighty-fighty over-the-top Tom Cruise knucklehead stuff that the series has become known for, only without Starfire to temper the heroes interaction.  As interesting as Roy’s new costume is, Jason’s is equally awful, resembling the excesses of Cable in the 90s, and there are real issues with scale (especially when it comes to the giant bad guy), blocking and facial expressions throughout the issue, and strange anatomy can be seen here and there.  It’s not a bad issue overall, though, and there are some funny bits to be had in Roy’s narration, as well as the introduction of a new character who could take the thematic place that Starfire vacated (although I hope it’s not as a romantic relationship for either of the heroes.)

All told, this issue makes an interesting exercise, and works as a first issue, making me wonder where these established (and inexplicably popular after nearly four years) characters are going to end up next.  I don’t know whether it’s the ties to Batman or to ‘Arrow’ (where Roy Harper is apparently a supporting character now) that keep this book rolling, but either way, I’m cautiously optimistic based on this new start.  Red Hood/Arsenal #1 is interesting, with some notable flaws to be worked out and also some intriguing new stuff to play with, earning a straight-down-the-middle 2.5 out of 5 stars overall.  I just wish they’d get rid of that ridiculous ball cap already, or at least make it a color that doesn’t clash with Roy’s super-duper costume.

Implications of something different, but kind of feels like the same-old, same-old...