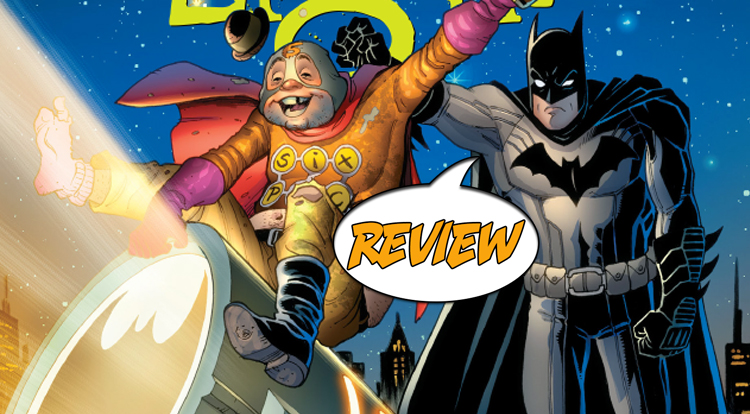 Previously in All-Star Section 8: Never the most impressive super-team in existence, the Section 8 (team leader Sixpack, Bueno Excellente, The Defenestrator, Dogwelder, Friendly Fire, Jean de Baton-Baton, Flemgem and Shakes) were instrumental in the survival of Tommy Monaghan, the late Hitman, and finally fell in battle defending the Earth from strange demonic things known as The Many-Angled Ones.  But, given that they’re superheroes, what do you think are the odds that they’ve actually stayed dead?

SLIM AND NONE, AND SLIM DONE LEFT TOWN

We open with a…  Flashback?  Sort of?  In any case, it’s a retelling of the greatest adventures of the Section 8, ending with Sixpack sacrificing himself to end the threat of the Many-Angled Ones.  Transition to the present day, where art critic Sidney Speck is hobnobbing with the young and hip in a gallery in Chelsea.  Thanks to a mixup involving drinks, debonair Sidney gets a drink with alcohol in it, and things start to get really gross.  Rushing to the liquor cabinet, Sidney downs and entire bottle of whiskey, and when he opens his eyes?

He’s back in Noonan’s Sleazy Bar in The Cauldron, dressed in his full costume, convinced that there is a massive threat that only he can stop, and that it’s time to put the band back together!

He quickly flips through his notebook of would-be heroes (intentionally crossing off nearly every character created in the ‘New Blood’ crossover back in the summer of ’93, which also spawned Tommy ‘Hitman’ Monaghan) before assembling a team including several new heroes, surviving original member Bueno Excellente and non-surviving member Dogwelder, somehow.  Even adding the demonic Baytor to their number leaves the Section 8 a man short, leading Sixpack to seek out Batman to round out their membership.  McCrea’s art in this issue is a little graphic in terms of bodily fluids and gross cellulite, but it also features some truly entertaining references to Batman stories past, and pastiches of Batman as drawn by Neal Adams, Jim Aparo and Kelley Jones.  The issue ends with Batman (the original, BTW, not the new armored Jim Gordon version) arguing over a traffic ticket and driving off into the night, leaving a befuddled Sixpack in his wake.

In short, it’s a perfectly hallucinatory issue, with some jokes that are clever, some that don’t quite land, and some that are just plain gross (or, as comic fans call it, “a Garth Ennis story.”)  Given the nature of Sixpack’s heroic history, nothing in this story might actually be or have happened, and that’s kind of perfectly fine.  All-Star Section 8 #1 is all manner of hallucinatory and messed-up, which fits both the protagonist and the creators perfectly, and I’m looking forward to seeing if ANY of this gets an explanation, leaving us with a better-than average 3.5 out of 5 stars overall.  Given that the original series ended with Tommy probably dying and hallucinating his own happy ending, Sixpack’s DT-fueled heroism seems to have a lot of potential…