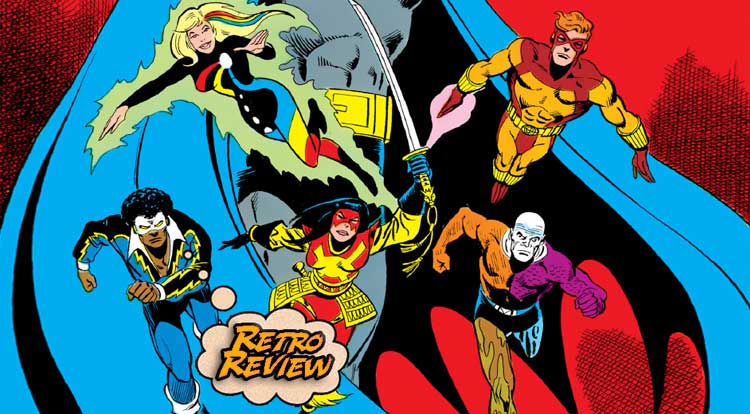 What would cause the world’s greatest detective to leave his place among the greatest heroes in the world to assemble his own team?  Your Major Spoilers (Retro) Review of Batman And The Outsiders #1 awaits!

Previously in Batman And The Outsiders: Pretty much everybody knows the story of how Bruce Wayne became The Batman, scourge of crime.  By the 1980s, he was finishing up his fourth decade (in our time) of superheroing, and had established himself as one of the best and brightest supers of them all, and was a core member of the Justice League of America, while still fighting to keep the streets of Gotham City as crime-free as possible.  All that changed, though, when his friend and advisor Lucius Fox flew off to the European duchy of Markovia on Wayne Foundation business.  Wrapped up in his own dual identity, The Batman was surprised to discover what happened next… With his close friend’s life in the balance, Batman immediately hits his JLA emergency signaller, calling the World’s Greatest Superheroes together to address the situation.  And by address, he means form a strike force and invade a sovereign nation with the full power of their super-abilities.  (In his defense, it would not be the first time.)  Unfortunately for Batman, JLA Chairman Superman is already aware of the volatile situation in Markovia… One of the major reasons that I love this comic book is seeing Jim Aparo drawing the entire Justice League, as the man is one of the most underrated draftsmen of any age of comics.  Sure, his Batman is amazing, but seeing the JLA assembled under his pen (even for just a page or two) is truly impressive stuff.  While his fellow Trinity members stand in awe, The Batman explains to them in no uncertain terms what he’s all about. And THAT, my friends, is a one-page recap of the origin of the Batman, making for one awesome page of comics.  (See what I mean about Aparo and underrated genius-ness?)  Of course, Mike Barr is no slouch either, as things quickly transition to action.  With no help from his JLA comrades, Batman calls in a favor from an old friend, enlisting Jefferson (Black Lightning) Pierce to pose as Lucius Fox’s brother, and bribe the Markovian army to let him go… With General Karnz dead, Jeff’s ploy is busted, and he is forced to once again put on the mask of Black Lightning (an identity which he had abandoned sometime before this issue, for reasons we don’t find out til next ish) and fight the Markovian separatists.  As for the identity of Karnz’s assassin?

She should seem familiar to anyone who knows their Outsiders history… While Black Lightning fights for his life, Batman moves to back him up, only to find an unconscious girl lying in the otherwise abandoned building he has chosen as his base of operations.  He tries to check her pulse, but then things get weird… The mystery girl’s identity is another puzzle that will have to wait for later (to be honest, it gets weird), but while Bats is busy dealing with her, crown prince Brion of Markovia is making moves of his own.  Having just watched his father, the King, die, Brion is willing to do whatever it takes to save his homeland, even by becoming a guinea pig for an experimental process created by one Doctor Helga Jace… Jace’s reputation as a metahuman expert (not that they called them metahumans at this point in DC history, but you gotta cut me some slack here) has spread outside of the borders of Markovia, bringing Rex (Metamorpho) Mason into the country’s Civil War in the hopes that she can help rid him of his strange chemical/elemental freak form.  When the revolutionaries intent on overthrowing the monarchy attack, Rex and Brion oppose them together, but both new hero and old find themselves overmatched. That last panel is more Aparo brilliance, and serves the double-duty of keeping anyone from presuming that Geo-Force is so easily taken down.  (Between his living burial and Metamorpho’s dismemberment, this could be a pretty disturbing comic experience, now that I think of it.)  Thanks to distraction from lost-girl Halo, Batman is outmaneuvered and taken by the Markovian separatists, and wakes up in a prison cell… He’s also a first-class jerk and one snappy dresser, but that’s not important right now.  With the players assembled, The Outsiders are more hours from assembling for the first time as this issue hits the big cliffhanger.  In 1983, this issue was chock-full of mysteries and such, but from our safe perspective here at Stately Spoilers Manor, I can tell you the following:

This issue starts The Outsiders off right, and each of their mysteries (including Batman’s own standoffishness and emotional distance) will be addressed in the coming months, but as first issues go, this one has a few things in its corner.  Aparo’s art is phenomenal here, and the Batman origin page may be my favorite telling of that tale, regardless of its condensation.  Barr gives each character their own voice, their own secrets and imbues them with life, making for fascinating interactions between them.  Most importantly, the cast of characters is a really strong one, leaving Batman and The Outsiders #1 with an impressive 4 out of 5 stars overall.  The creators are clearly working to replicate the success of the Wolfman/Perez Titans a few years earlier, but have done so with enough skill and aplomb that their team was a cornerstone of the DCU all the way up until the Flashpoint retcon.  (Anybody know about any Outsiders sightings post-New 52?)

A big turning point for the Dark Knight, and a cool assemblage of characters (plus super-rad Jim Aparo art!)