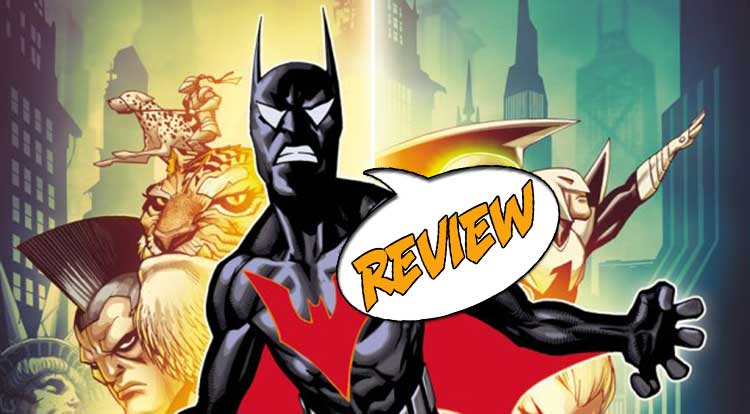 So, the all-new all-different DC Comics is here, and Batman Beyond is certainly a very different place than we last saw it. Previously in Batman Beyond: TERRY MCGINNIS IS DEAD! TIM DRAKE HAS GONE BACK TO THE FUTURE! THE NEW BATMAN BEYOND BEGINS NOW!

NOT YOUR OLDER BROTHER’S BATMAN BEYOND

When Terry died, and the mantle of the Bat was taken up (finally) by Tim Drake, the hope was the timeline would reset itself, and everything in the future would be fine. Unfortunately, that isn’t the case, as Neo Gotham appears to be the only city left untouched by Brother Eye’s path of destruction. There’s no Justice League, there are no other heroes, just Tim hoping to fight it out and save the day.

It’s an interesting premise to see that even a minor change in the past doesn’t necessarily change the future for the better. Neo Gotham is protected by The Veil, a security scrambling system that keeps the city hidden from Brother Eye. Superman has been turned into one of Brother Eye’s drones, and those who have survived outside of Neo Gotham have been rounded up and put in a concentration camp called The Lodge. There is a lot of action in this issue, and a lot of time spent filling Tim, and thus the reader on what has changed, and thus sets up for what is to come next.

The next, Dear Reader, is to bump Tim Drake out of the primary DCU timeline, so the company can push Damian as the only Robin, and move a fan favorite off to the side where he won’t bother anyone. While I love it that Tim is finally Batman, the how, and more importantly the why seems a bit of a slap in the face to the character most long time readers have known as Robin (Tim Drake debuted in August 1989). If, or more importantly, WHEN this Batman Beyond series is canceled, Tim Drake will be a fading memory. A character trapped in the future that allows the publisher to claim the character hasn’t been killed off, and that anything can happen.

As far as the story goes, Batman Beyond #1 kicks off with a huge action sequence of Tim fighting the Jokerz, and it doesn’t slow down after that. Even the shocking appearance of Superman seems like a natural reveal. What really caught my attention, wasn’t the crazy post apocalyptic world, but rather Barbra Gordon outing Tim on the final page of the book. In a weird way Dan Jurgens has done everything needed to hook new readers and give us hope that Tim will be able to fix everything, and give us a new Batman Beyond that captures the thrill of being Batman for the first time, with characters and a world that seem familiar.

Bernard Chang captures everything I remember about Neo Gotham and the sleek lines of the Batman Beyond suit, but here he twists the world and makes it scary and uninviting. Sure, Neo Gotham was always a place filled with danger, but now it is a place filled with danger, protecting the citizens from the dangers of the rest of the world. Chang’s take on Superman is probably the most disturbing part of the book. In a world where someone like Superman can be taken down, how can Batman ever win? Combine the great line work with color and lighting effects by Marcelo Miaolo, and Batman Beyond #1 becomes a visual treat.

Even though we saw the last Batman Beyond story years ago on the Justice League Unlimited animated series, I still miss that we aren’t seeing more adventures of Terry McGinnis and cranky pants Bruce Wayne. The new Batman Beyond series mixes a lot of what you will remember, and characters that you love, into something that is like looking through a warped window. It’s a bit disturbing and unsettling, but by the end of the issue, I wan’t to know how this is going to end. The writing is solid and the art is fantastic, and I hope Batman Beyond, and more importantly Tim Drake, are able to last more than six issues. If you like Batman Beyond and you want to know what happens after Futures End, pick up this first issue!

The new Batman Beyond series mixes a lot of what you will remember, and characters that you love, into something that is like looking through a warped window. I want to know what happens next.