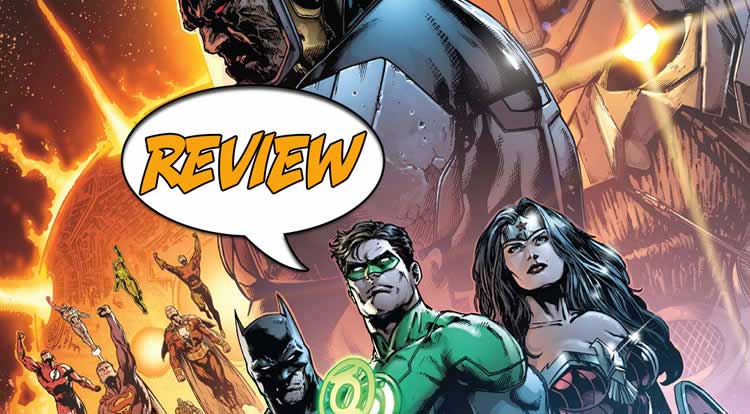 With so much attention being paid to new DC number one’s and new Marvel books like Groot #1, it feels like this gem is being overlooked, so I thought I’d focus on it this week!

Of course, Justice League was right up there with Batman each month when the New 52 hit the ground running, making it one of DC’s biggest hits. I’m going to be interested to see how it’s sales do with the new DCU. Previously in JUSTICE LEAGUE: “The critically acclaimed team of Geoff Johns and Jason Fabok present the much anticipated, extra-sized first chapter of ‘DARKSEID WAR!’ When the Justice League investigate a series of unexplained murders on Earth, it leads them to the frontlines of a war unlike any the DC Universe has ever seen – a battle between the two most powerful villains in existence: Darkseid and the Anti-Monitor! Meet Darkseid’s daughter – a mysterious force of evil with a bizarre connection to the Justice League! Plus: The horrible secret of Superwoman’s baby! The ultimate temptation of Batman! Lex Luthor vs. Superman – no holds barred! New villains! New allies! And so much more in the DC Event that has been building since JUSTICE LEAGUE #1!!”

I normally talk about the writing first, but I really loved Mr. Fabok’s art. I became a big fan of his back when he was on Detective Comics, and I was sorry to see him leave that title. But his rendering of the biggest heroes in DC really is top notch!

I particularly liked how he drew Mister Miracle, a hero I’ve missed since the New 52 arrived. Scott Free was a Jack Kirby creation I could never get enough of, so seeing him back in a DC comic was a treat for me! And Fabok makes him pop off the pages, paying close attention to details like his mask and other aspects of the character.

I also was drawn (sorry for the pun) to how he presented Superman’s chest symbol. He brings a 3-D effect to it, and I rarely care about such things. His ability to bring Superman’s facial expressions to life was also compelling, and I wouldn’t be at all surprised if this artist one day is moved to a title with this hero as the main attraction.

JOHNS KICKS IT INTO HIGH GEAR

Geoff Johns, one of my all-time favorite writers, and he’s been building up for this storyline for a while.  He realizes you can’t have a major event in EVERY issue, so I’ve been anxiously awaiting this issue when things begin to happen at a rapid clip.

Several things captured my attention, such as the hunting of a human woman with a certain name, which engages Batman right away. Things blossom into a “larger” story with more galactic implications pretty quickly, and by the end of this issue, we’re fully engaged and heading into war.

I’m also fascinated by Darkseid’s daughter. It reminds me of the “old” gods, who had a penchant for spawning children with human women. That this dark god has generated a child like her is intriguing, and I’m curious to see what role she’ll play in things as the story moves forward.

Then again, whenever Luthor and Superman face off, it’s a tense situation, and it’s well portrayed here!

It also appeared that Wonder Woman’s bracelets were destroyed! Do the Finchs know? What’s up with that?

But the biggest surprise of the entire book to me was what’s going on with Cyborg. I can’t bring myself to spoil it here, but it makes abject sense and turns Vic Stone into a more “human” hero than he has been in the past. My jaw literally dropped open when I read it!

THE BOTTOM LINE: This Is What the League Is All About

Some writers really struggle with the Justice League. What do you do with so many heroes with such strong powers? That doesn’t seem to phase Mr. Johns, though. And with Fabok’s art, it’s quite the gripping presentation!

I have a feeling this title will remain at the top of the monthly sales charts given the creators’ abilities to keep telling this level of story! I don’t know what’s going to happen next, and I always enjoy that!

So don’t let the flurry of new titles and returning books distract you – this comic continues to be a foundation for DC, regardless of what other universes and companies are doing!

The Darkseid War begins, and it's a doozy!