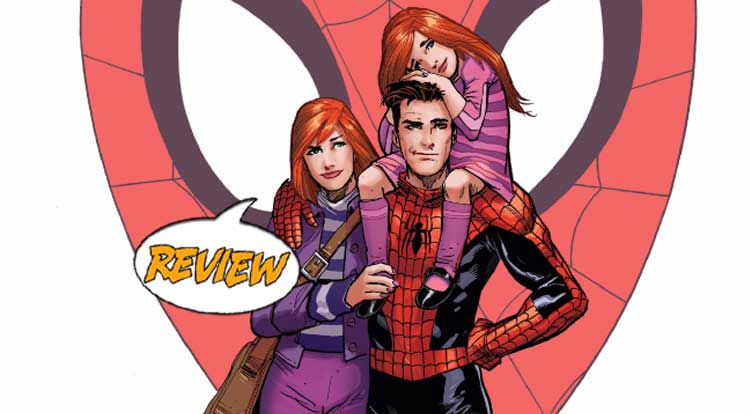 The story that several fans have been clamoring for since ‘One More Day’, but…

Will it be what they’ve been hoping for?  Your Major Spoilers review of Amazing Spider-Man: Renew Your Vows #1 awaits!

Previously in Amazing Spider-Man: Renew Your Vows: We all know the tale by now: Peter Parker, bitten by a radioactive spider, thrown into a life of chaos and loss, eventually finds his true love in the form of the wild party girl next door.  They marry, they’re happy, his life is still chaos, and eventually, his beloved Aunt is fatally wounded because of who and what he is.  In order to save the life of Aunt May, a deal is struck with the quasi-literal devil, and the marriage of Peter Parker and Mary Jane Watson is torn asunder by an unholy bargain…

…but not in ALL corners of the multiverse.

BACK IN THE DAY

We open, somewhere in the multiverse (which doesn’t exist anymore, apparently, but I’ve become inured to strange, impossible happenings on worlds that may or may not exist after the last couple months of reviews), as Peter and Mary Jane enjoy breakfast with their toddler-ish daughter, Annie.  (I *think* she’s named for MJ’s late Aunt Anna, which is a lovely choice, if one were to ask me.)  Peter mentions that he’s been too busy as Spider-Man picking up the slack for Moon Knight, Iron Fist and others, all of whom have seemingly gone underground (a quiet scare chord played in my head at this bit of dialogue.)  Things quickly progress, as Peter discovers through his day job at the Daily Bugle that several heroes (and The Punisher) have been found murdered, and sets out for Avengers mansion, where he discovers that even more heroes are missing and presumed dead, including all of the X-Men, and that the prison at Ryker’s Island is in the middle of a full-scale prison break.  That’s where the story starts to get truly ugly for me, with the menace known as Venom escaping to murder Peter Parker’s wife and daughter.

A TERRIBLE CHOICE TO HAVE TO MAKE

There are many indicators that this takes place in an alternate timeline that sort of parallels the early 1990s of Marvel Comics history (with some nice visual and costume cues by Adam Kubert throughout, including Captain America’s uniform inverting the positions of star and “A” in his regalia), which makes sense of the murderous, gloopy Venom shown.  As the Avengers face down the terrible menace that has been (seemingly far too easily) murdering all the heroes, Spider-Man engages in a desperate combat against one of his most powerful foes, finally making the fatal choice he could never make in our world, actively choosing to give up on his life as a hero and consciously killing Venom in the collapse of a burning building.  As the issue closes, we see an older Parker and a grade-school age Annie living in a world where he gave up on one responsibility for another more important one: His child…

I really, REALLY hate that bit, by the way.  It always infuriates me when comic creators insist that the only way a hero can be effective is if he/she has no ties or family, but I’m willing to give the story a chance based on Slott’s previous work with troublesome concepts.  From an art perspective, this issue is also a conundrum, with Venom looking utterly AMAZING in every panel, but a four-panel sequence of Peter Parker on the final page looking incredibly angular and off-putting.

THE BOTTOM LINE: NOT *QUITE* WHAT WE BEGGED FOR

In short, we have a comic by two proven creators where each is experimenting with something new and different.  On the one hand, I’m willing to see where the book is going, especially when it comes to the Dan Slott and Spider-Man, but on the other, it’s disheartening to see Peter Parker give up on his heroic ideals and live under the thumb of a super-villainous dictator, even if it’s to protect his family.  With Kubert and Dell either intentionally drawing in a new style or just not meshing well, it makes for a contentious, but not entirely unpleasant reading experience.  Amazing Spider-Man: Renew Your Vows #1 is not what I had hoped it might be, but it succeeds in being both surprising, even if if feels a little bit off and a little bit cramped for the amount of story it contains, and still earns 3 out of 5 stars overall.  I don’t know if I’m going to like where this is going, but I find it intriguing enough to give it a chance to get there…

A tale of hard choices that isn't given enough room to really explore them, and falls a bit flat for me.