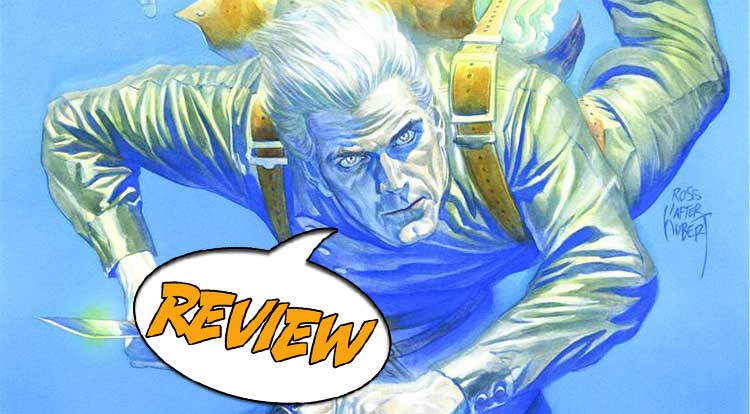 Dynamite Entertainment unleashes a brand new series featuring The Avenger doing what he does best – AVENGING! Will Mark Waid and Ronilson Freire take the character to new heights, or will the hero crash and burn? Sorry, too soon…. Previously in Justice Inc. The Avenger: This is the first issue, but not the first story of The Avenger, who was created by Street and Smith in 1939. Richard Henry Benson made his millions crossing the globe making discoveries, and exploiting resources. During an airplane journey, his wife Alicia and daughter Alice were both killed, and the resulting shock turned his skin and hair completely white, his face became paralyzed, and he discovered he could “mold” his face to look like anyone.  Benson then decided to avenge those that killed his wife and daughter by becoming… you guessed it..  The Avenger.  The character did have a role DC Comics’s The First Wave event, but that didn’t last very long. Dynamite Entertainment was able to gain control of the character, and in 2014, The Avenger appeared in the 5-part mini-series Justice Inc. where he confronted those who killed his family, but Doc Savage talked him out of killing them outright, and set him on a new path to right wrongs, without killing.

STARTS OFF WITH A BANG

The opening pages of the issue give readers a really good look at how the Avenger and his operatives of Justice, Inc. work, as we are dropped into the climax of one adventure that ends with a bang, and introduces the idea behind the title character. I’ll be honest, I’m a sucker for these kinds of intros, as it instantly grabs you, reveals the necessary information, and gives readers a chance to catch their breath as the main story begins.  It’s a very pulp way to begin a story, and Mark Waid nails it here.

From there, Waid continues his pulp magic with excellent narration that takes the reader by the hand and leads them through Bleek Street along with Mrs. Menter, who needs the help of Justice, Inc. to figure out why a ghost is haunting her home. Justice, Inc. The Avenger #1 is so well done, that I almost wish it had been done as a prose novel, as I found myself wanting more of Waid’s words.  By the time the issue reaches the cliffhanger moment, I was convinced Waid was channeling Lester Dent, Paul Ernst, and anyone else who went by the name Kenneth Robeson.  This is simply a great story, that is written by a master of words. In 1975, DC Comics published the first Justice, Inc. series starring the Avenger. Interestingly, cover artist Alex Ross pays homage to that first cover by making it his own.

One of the toughest challenges when drawing the Avenger is remembering that he can’t express emotions on his face. Artist Ronilson Freire does a great job in keeping everything in check throughout the issue, but it appeared as though there was one moment where a little emotion slipped through.  Everything else however is fantastic – especially when Benson and Algernon Heathcote Smith discover the ghost, and we are treated to four pages of a nervous system running around a broken down apartment building.

BOTTOM LINE: ALL THE PULP GOODNESS YOU HAVE BEEN MISSING

I think we all realize that Mark Waid has hit a new high with his writing, and Justice, Inc. The Avenger #1 proves that on each and every page. This issue feels like a book from the 1940s, as it doesn’t bow down to marketing research that says you need to add modern day bits and pieces to make it acceptable to a certain demographic.  This is the pulp book you have been waiting for all your life, and you need to pick it up this week.

This is the pulp book you have been waiting for all your life, and you need to pick it up this week.