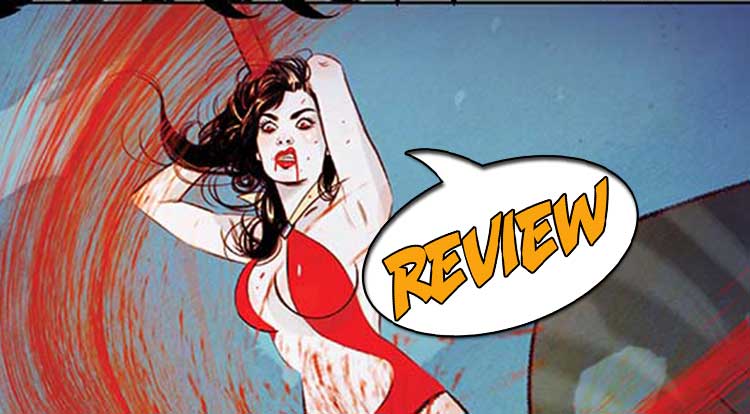 The teams have picked their players, and it is time to go to battle! But will the heroines fight each other or team up against evil?  Swords of Sorrow #2 has been released, and we have your Major Spoilers review ready. Previously in Swords of Sorrow: The Traveller and her Courier have handed out the Swords of Sorrow to their champions from across time and space, as the coming battle between the Prince and his bad girl squad gears up.

THEY ARE SO WORTHY

This issue kicks off with an interesting exchange between the Traveller and the Courier over the worthiness of the heroines that have been selected to wield the black swords. While we do see heroes fighting heroes in this issue, I found the conversation between two characters weighing the pros and cons of their selection to be even more interesting. I don’t know if it will be addressed down the road in some kind of surprise twist, but it is interesting that The Courier takes the side against the heroes. As a loyal assistant, I would have expected the Courier to quell any concerns the Traveller may have over her selection.

There is an odd bit of structure going on that mildly troubled me in this issue. There are story elements in this issue that happen before events in the tie-in books (Vampirella & Jennifer Blood #1) and there are some events that happen after the events in the tie-ins (Masquerade Kato Special). It isn’t a terrible thing, as the team-ups seem to be independent of each other, and as long as the reader remembers these events are happening at once and not in a linear progression of time based on the release date, it clears up much of the head scratching.

The highlight of this issue is seeing the Prince unleash his demons on the heroes and how each is more than willing to use their black swords to fight back. Readers only get a brief look at the heroines from other times as this issue focuses on Dejah Thoris and Red Sonja working together to fight a common foe. The way Dejah saves the day is well done, and shows that one doesn’t need to use a sword to take down the enemy.

There are a number of well written sequences in this issue, and I particularly like how Gail Simone is able to capture the vernacular of each of the characters. Even though the swords allow Dejah Thoris and Red Sonja to understand one another, it’s very nice to see word use remains and continues to push the idea that these two are complete and utter strangers, with totally different backgrounds and world views, who will need to team up.

And team up they do – by the end of the issue, Sonja and Dejah have decided to take the fight to the enemy. I’m glad the story moved to this point by the second issue, because had it been drawn out another issue or two would have ruined the fast paced nature of this event.

The art continues to shine in this issue, and while the characters, who generally wear very little, could be sexualized and objectified through the art, they are simply treated as characters fighting for their lives. No awkward poses, no odd angles, just very well rendered panels showing heroes fighting demons. If I did have to find one complaint in the art, it would be that the close ups tend to have heavier line work, but that is a personal issue, not a knock on the artist’s style.

Going into this issue I really thought there would be a slight drop in the action as characters stood around deciding what to do next. Instead, Gail Simone and Sergio Davila crank up the action and drive us to the next thrilling installment. While I wish this series came out on a weekly basis, I’m satisfied to wait until issue three arrives, as it gives me time to read some of the tie-in issues that we saw in this issue. If Convergence didn’t do it for you, and Secret Worlds has you confused, then Swords of Sorrow is a book that cuts the crap and serves up a story of good versus evil. I highly recommend picking up Swords of Sorrow #2 this week.

If Convergence didn't do it for you, and Secret Worlds has you confused, then Swords of Sorrow is a book that cuts the crap and serves up a story of good versus evil.