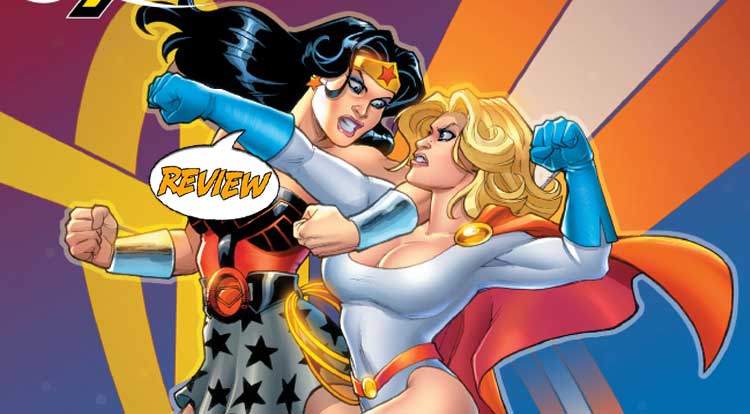 After a year of inactivity, the Kryptonians of Earth-2 are once again ready to fight.

It’s a good thing, too, because Red Son Superman is taking the “fight or die” stipulation as seriously as he does everything else.  Which Kal-El will prevail?  Your Major Spoilers review of Convergence: Action Comics #2 awaits!

Previously in Convergence: Action Comics: After a year under the dome, both Power Girl and her more famous cousin have made quiet lives for themselves, only to find their world under attack from beyond blah blah blah Telos-cakes.  Now the combat begins!

Our story opens with a lovely romantic moment between Power Girl and her boyfriend Andrew, wherein she tells him she loves him and sets off to find out what is happening.  Something, as we now know for what seems like forever, has been rotten in the state of Telos, and as she’s attacked by an invisible jet, Power Girl realizes that there’s more to the multiple cities than it seems.  At the same time, Lex Luthor finally successfully pulls off his coup, taking over Moscow and locking Stalin away with his G.I. Robots, with no sign of the city’s super-powered overlord.  Earth-2 Superman arrives to break up the Amazon/Argo Citian battle, convincing both combatants with the power of his words that they shouldn’t fight simply because some alien schmuck says so, and earns a guarantee from Wonder Woman that Moscow with not attack, so long as they’re not attacked.  As the issue ends, Superman and Power Girl set off to find out the truth, a story that ties into…

WHERE THE HECK IS RUSSIAN SUPERMAN?

That weird time-blip isn’t the only thing that I find odd about the story, as I cannot find any reference or explanation (not even a throw-away line) that tells us where Red Son Superman has gone during the events of this story.  Given his prominent placement last issue, it’s an unusual choice by the writer.  Then again, there are a lot of strange bits and pieces of story to be had, and much of this issue’s dialogue is awkward at best.  Things are a little more stable on the art side of the equation, but even there, we find strangely inconsistent faces/hairstyles, and strangely bulbous anatomy, especially on Superman.  Power Girl ends up oddly cross-eyed several times, including notably in the final splash page, a particularly egregious (and truly disturbing) image.

THE BOTTOM LINE: NOT FEELIN’ IT

Between the strange disappearance of a major character (which could have been easily smoothed over in dialogue), the general gloopiness of the art, and a decided lack of stakes, this one is a real disappointment.  Crossing over into a comic two weeks ago isn’t really a fatal flaw in itself, but since very little actually happened in this issue, and what we did get was verbally didactic and visually off-putting, it serves as a final nail.  Convergence: Action Comics #2 hasn’t really got a lot going for it, and serves as one of the most disappointing issues of the crossover so far, especially given the wonderful Amanda Conner cover art, earning 1.5 out of 5 stars overall.

Stilted dialogue, strangely bulbous and inconsistent art, and a big unanswered question... (Also: It ties into Convergence #6, which came out two weeks ago, making it feel out of date already.)