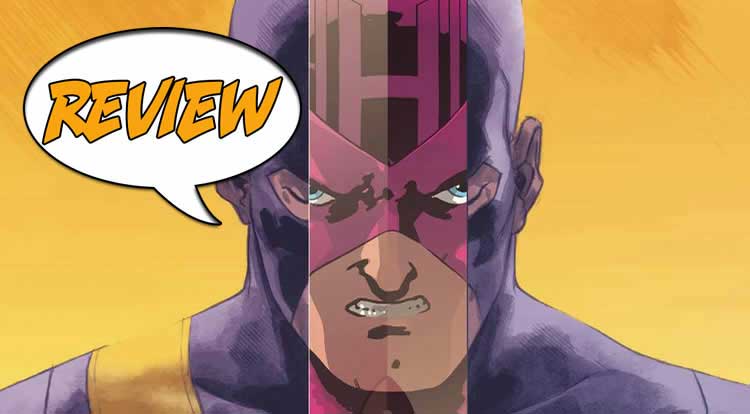 One of the interesting developments in comics the last few years is what I like to call “The Rise of the Archers.” In both Marvel and DC, the hero with the bow and arrows has done well in his monthly title.

What’s particularly intriguing to me is that Jeff Lemire, who previously scripted Green Arrow for DC, has now begun to write Hawkeye for Marvel. He’s done a good job of maintaining the spirit of the title while infusing more action, something I felt the book really needed.

Previously in ALL-NEW HAWKEYE: “What makes a hero and what breaks a hero? Hawkeye and Hawkeye experience both. In ONE GLORIOUSLY BEAUTIFUL ISSUE!”

Of course, Lemire and company are following the critically acclaimed series by Matt Fraction and company that apparently fell victim to schedule problems. Marvel picked the perfect replacement team, in my estimation.

The previous creators set up one of my favorite parts of the book, the relationship between Clint and Kate Bishop, both of whom call themselves “Hawkeye.” Their interaction has become more and more important over time, and they shine as Lemire carries on the series.

As I mentioned previously, Lemire has added more action to the series, something I hoped he’d do. Don’t get me wrong – I did enjoy the title, but there were times I’d call out, “Will someone please DO something?” I liked the interaction and people referring to Clint as “Hawkguy” and all, but comics are a visual medium, and too much talking can really make diving into a comic tough, despite what some television shows thrive on.

We see Lucky, Clint’s pet dog, who always brings a smile to my face. We also see Clint’s “family” extended some with the addition of three “little kids with deadly powers,” the “secret weapon” that the two Hawkeyes were sent to recover. They’re as real as the others in this book, even telling Clint that as much as they like him and appreciate all he’s done for them, they still prefer Kate. “Gee, thanks,” Clint responds.

Clint and Kate, people who like doing things, run into the cement block mentality that is S.H.I.E.L.D., and even that organization’s director realizes that the pair can accomplish certain things her group cannot, so she nudges them in the right direction.

Also, there’s a second story that runs along the bottom of the pages. It’s a flashback to Clint’s youth. He and his brother sneak in to see the circus perform, and they aren’t there long before a familiar face finds them and decides they need to be punished by playing “a little game,” something we’ll find out more about next month.

I have mentioned in other reviews that I continue to be a big fan of Lemire’s writing and art. This book extends my admiration for his writing. He can script an archer no matter what company he works for!

Again, why mess with success, so the art resembles what has gone before with the main story resembling the art we’ve come to expect. The aforementioned second storyline is told in a painted style, clearly delineating what takes place in what story.

The choices of subdued colors also makes the series, even though it’s called “All-New,” clearly looks like the previous version of the series.

I do like Perez’s ability to portray both action and character moments with the same subtlety the color choices represent. Very well done!

THE BOTTOM LINE: Archers We Can Relate to

I’m often not as fast as other folks who can sign up to review certain titles before I can get to them. I tend to wait until I’ve read the latest offerings so I can review what I think was one of the best books out that week.

Hawkeye has been worth the wait, and I’m glad I’ve had my chance to talk about the series. I hope you’re enjoying it as much as I am. I’m happy Mr. Lemire has had the chance to put his unique way of mixing drama and action into a loved format, and I think it’s a book that will be around for as long as the team wants to stay on it.
Clint and Kate are fun to read about, and I know Lemire will keep their relationship light and breezy, more fun than frenetic. Can’t wait!

But the “All-New” part, now that pretty much every Marvel book may be called that, grates on me some. The “All-New” part is that we see new situations, but a lot of this book continues what we’ve seen before, so this part of the title’s name could easily be removed. I guess it’s one way to make sure Hawkeye is in the upper portion of the alphabet in stores that organize their just-received product that way. I bet even Clint would find the humor in that!

Hawkeye has been worth the wait, and I’m glad I’ve had my chance to talk about the series.