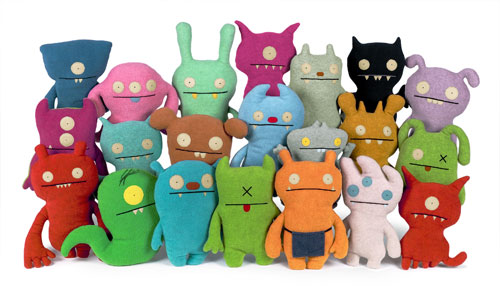 [Movies] The Uglydolls are getting the film treatment

The Wife and I first encountered the Uglydoll in 2003 or so, and fell in love with them at first sight. The characters have been around since 2001, and have appeared in movies, but have not had a movie of their own. Until now.

STX Entertainment has announced it is launching a family division with the Uglydoll being its first animated feature.

“We created Uglydoll on the premise that real beauty is found in the little twists and turns that make us who we are,” said David Horvath in a statement. “We could not be more excited or optimistic about the future of the Uglydoll universe in the hands of the STX Entertainment team.”

STX Entertainment plans to fund 12-15 films a year, and as of this post, has not contacted Major Spoilers regarding a Critical Hit movie or a Modern City Netflix series.  It is hoped the company comes around soon on this.

As far as the Uglydoll movie goes, there is no word on a release date.

I’m torn between Wage and Ice-Bat as my favorite Uglydoll… what is yours?