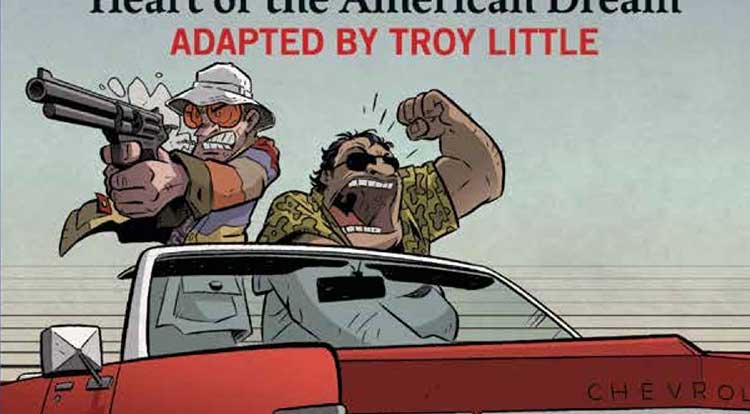 Top Shelf Productions has announced an agreement with Hunter S. Thompson’s estate to adapt the title for comic book readers, and it has tapped Eisner-nominated artist Troy Little to adapt it.

The much-beloved Fear and Loathing, subtitled “A Savage Journey to the Heart of the American Dream,” follows Thompson analogue Raoul Duke on the mother of all Vegas benders, as he and his attorney Dr. Gonzo cover a motorcycle race, crash a drug-enforcement convention, and rack up obscenely large room-service bills, all while dosed to the gills on a truly spectacular assortment of mind-altering substances.

It’s been more than a few years since I last read the original text, and a bit longer since watching the movie adaptation, but I remember it feeling me with a crazy drive and even crazier thoughts.

“What were we doing out here…? What was the meaning of this trip? Did I actually have a big red convertible out there on the street? Was I just roaming around these Mint Hotel escalators in a drug frenzy of some kind, or had I really come out here to Las Vegas to work on a story?” — Hunter S. Thompson, Fear and Loathing in Las Vegas

“I’m so pleased that one of the first collaborative projects to come out of the Top Shelf / IDW relationship will be Troy Little’s inspired take on a true classic of American literature,” said Top Shelf Editor-In-Chief Chris Staros in a press release sent to Major Spoilers. “One of the most unforgettable writers turned loose in one of my favorite cities! We can’t wait to show you what Troy’s done with it.”

Fear and Loathing in Las Vegas is scheduled to arrive in October 2015.