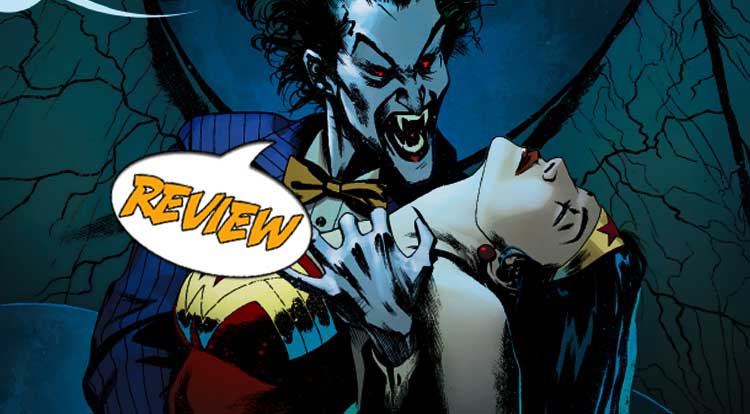 Plucked from the past, stolen from Pre-Crisis Earth-1, a newly repowered Wonder Woman must face vampiric monsters from an alternate Gotham City…  Is even the princess of the Amazons immune to a magical bite?  Your Major Spoilers review of Convergence: Wonder Woman #2 awaits! Previously in Convergence: Wonder Woman: After a year of a normal relationship with Steve Trevor and a mundane life, Diana Prince is once again Princess Diana of the Amazons, the hero known as Wonder Woman.  Her Gotham City, unfortunately, is under siege by agents of another Gotham, a world known to we, the readers, as the world of ‘Red Rain,’ where Batman became a vampire.  A vampiric Joker, Poison Ivy and Catwoman have found their way to Wonder Woman, killing and turning her friend Etta Candy, and capturing her paramour, Steve.  Can Wonder Woman save Gotham?  And if so, will she be able to save her dearest friends?

OKAY, A VAMPIRIC JOKER IS TERRIFYING

As our story opens, Wonder Woman is trapped in an underground cavern with a fanged and winged version of The Joker, and he is… maybe the creepiest thing I’ve seen in forever.  I mean, really really off-putting, uncomfortable stuff, so good work from our creators here.  While Steve Trevor fights off Joker’s thralls, Diana goes toe to toe with the madman himself, even snapping his bony neck to stop him from murdering again…

…which doesn’t really work, as he’s a vampire.  She tries to escape and find Steve, but Joker keeps intercepting her, and it becomes a race against time to save her beloved from a fate worse than death.  Aaron Lopresti’s art is effectively creepy, and vampiric Poison Ivy and Were-Catwoman are impressively dangerous-looking, but it’s Larry Hama’s story that takes center stage here.

Many of the Convergence books have a central problem, in that they feel like there aren’t any real stakes for our characters.  The Outsiders, The Titans and others have finished their two-issue minis essentially unchanged from the point they entered the continuity again, but Wonder Woman’s world isn’t nearly as lucky.  First Etta, then Steve Trevor are transformed into undead monsters, and Wonder Woman ends the issue fundamentally changed from either her traditional Earth-1 persona or the world we’ve seen in the previous ish.  It’s a solid story that, once again, has a mysterious earthquake in it (though this one is a direct force upon the plot, and seals at least one character’s fate) and ends in a really dark (but dramatic) place for our Amazon princess.  Most importantly, it manages to effectively straddle the line between being faithful to the Wonder Woman of the time period, while serving as an entirely new take on the character, something that many of the Convergence issues have never been able to balance.

In short, it’s really quite good, and I hope that the last issue of Convergence features at least SOMETHING of this Wonder Woman, because she’s in a really dark and  interesting place.  Convergence: Wonder Woman #1 is solid, well-drawn and transformative to the Wonder Woman of old, making for a satisfying story and earning a solid 3 out of 5 stars overall.  If you’ve ever wondered what a Vertigo-style Wonder Woman title would read like, I think I have the comic book for you…

A strange setting for the Amazing Amazon, but still a creepy and effective tale.