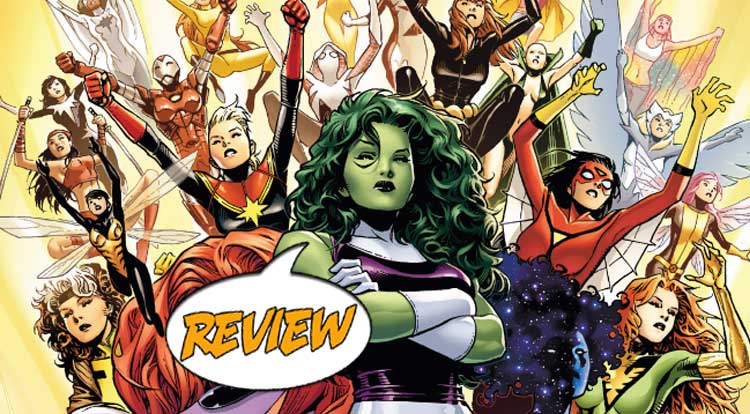 The Multiverse has been destroyed.  Now, there is only Battleworld.

How do the heroes of the lost world cope with their new status quo?  Your Major Spoilers review of A-Force #1 awaits! Previously in A-Force:  “The Multiverse was destroyed!  The heroes of Earth-616 and Earth-1610 were powerless to save it!  Now, all that remains… is Battleworld.  A massive, patchwork planet, composed of fragments of the fragments of worlds that no longer exist, maintained by the iron will of its god and master, Victor Von Doom!  Each region is a domain unto itself!  This is the story of A-Force!”

Those who have read the first two issues of Secret Wars know that there’s a little bit more here than just ‘Crisis On Infinite Earths’ universal torment.  For the first time on record, the heroes of the Marvel Universe have failed utterly in their attempts to preserve their home planet, and now Doctor Doom rules supreme.  The island of Arcadia is ruled by She-Hulk, now awarded the title of Baroness, and she and her force of protectors (Captain Marvel, Dazzler, Spider-Woman, Medusa, and what seems to be the majority of the female Marvel heroes) keep the city safe.  That protection is quickly put to the test as a massive Megalodon (a prehistoric sharkish beastie) attacks the shore, only to be taken down by Dazzler, Sister Grimm of The Runaways, and Miss America, who gives the creature the coup de grace, by bashing it mercilessly and throwing it over the barrier and out of Arcadia entirely.  All of the assembled heroes are stunned by her actions, but it’s not clear at first why everyone is so shaken…

…WITH A DARK SIDE

…until Sam Wilson (now one of the Thors who keeps order between realms) arrives to pass judgement on America for breaking the boundaries between worlds.  The darkest and most disturbing part of the story comes as Doom’s sheriff (Doctor Strange, of all people) argues with She-Hulk about the penalty, and we see how difficult it must have been to negotiate this world to ever build Arcadia in the first place.  I’m really unnerved by Strange as the face of a totalitarian regime, and the darkness of this story is likewise hard to face, as America is sentenced to life in prison in whatever The Shield is, while an angry and grieving Sister Grimm discovers a stranger to Arcadia who may or may not be a familiar Avenger.  It’s a challenging book, but one that I actually like better than the main Secret Wars title, mostly because a lot of my favorites are in this issue, and I enjoy She-Hulk in a leadership role.  The art is really well-done, as well, with the island and it’s people well-defined, and all the heroes looking great in triumph and in tragedy.

If you’ve ever wondered what a superhero title set in the world of Critical Hit would be like, I recommend you check this book out, as it’s got a great cast, a fascinating premise, and is really complex and well-written.  (As for any controversy about the all-female cast of heroes?  It’s a non-issue for enjoyment of the story, in my eyes.)  A-Force #1 is promising on both a writing and art front (and will be continuing as on ongoing even after the Secret War, something else I’m quite happy with) and hits the mark with aplomb, earning 4 out of 5 stars overall.  If nothing else, I want to see how this premise can carry over into whatever the reformed Marvel Universe is going to be…