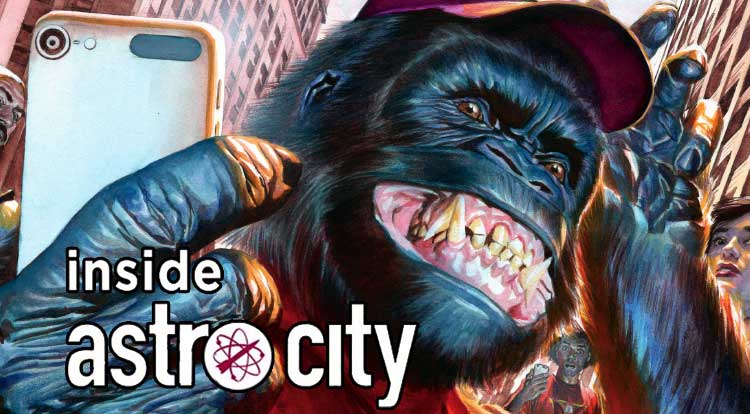 Inside Astro City #23 With Kurt Busiek

Welcome to Inside Astro City, a column focusing on the Vertigo Comics series Astro City from Kurt Busiek, Brent Anderson, and Alex Ross.  Each month, we’ll take a look at the current issue of the series, and ask series writer Kurt Busiek questions about the book.  Time now to begin tale of Sticks and his journey to find his dream gig, as we look inside Astro City #23! Astro City #23: What do you do when you’re a talking gorilla, and all your life you’ve wanted nothing more than to be a drummer in a rock & roll band? That’s right, you go to Astro City. But from there, well, things are never all that simple. Also featuring the First Family, Honor Guard and more. 1. There’s a rich history of gorillas in comics, including Mort Weisinger’s legendary insistence that a gorilla on the cover equals instant boost in sales.  You’ve said for years that Astro City was in need of a gorilla presence, was there a particular reason it took so long to put the right elements together?

Kurt Busiek: For a long time, I knew the story would be about a talking gorilla teenager who came to Astro City to be a rock & roll drummer, but I just didn’t know what happened next. I didn’t have a full story yet.

Then, a couple years ago, it all fell into place, and I outlined it, first as an incredibly tight single-issue story, and then as a two-parter. At that point, it was just a matter of waiting until the stories I had to get to earlier, for one reason or another, got out of the way. And when the LOVERS QUARREL four-parter was wrapping up, and we needed a two-parter to fill out that TPB collection, we didn’t waste any more time. It was finally Sticks’s chance to shine. 2.  I’m honestly torn as to whether I want to see Sticks take the offer to suit up and join Reflex 6, mostly because I keeping finding the non-superhero characters in Astro City to be some of the most compelling.  Is it ever difficult to avoid the impulse to put a cape on, say, Miss Ellie and have her join the Honor Guard?  (That’s a terrible example, but…)

KB:  Actually, you’ll get to see that Ellie is at least indirectly helping out Honor Guard from time to time as early as next issue.

But no…it’s not like putting Stick or Ellie or anyone else into costume would guarantee them regular space. The hero teams are background characters as often as they are lead characters, and if I have another story to tell about anyone, I don’t need to have them in a team to feature them. It’s not as if Honor Guard has their own series, after all. The book is ASTRO CITY, and we can visit with anyone we like, hero or not. 3. It’s been quite a while since we’ve seen the First Family.  Aren’t Julie and Augustus getting up in years to still be actively adventuring?

KB:  They are. These days, they tend to let the younger generations do the fighting, but they’re still spry enough (thanks for some odd adventures in the 1980s) to get around pretty good. And there’s nothing wrong with their brains…at least not so far. 4. We get our first actual look at Reflex 6 (unless I missed one) this issue, including a new name for team founder Skyraker.  What was wrong with Skysweeper?

KB: This is actually the third time we’ve seen Reflex 6, I think. They were part of the big superhero attack on the Ambassador’s door back in #1, and we saw them fighting robots in the Ellie story, too.

As for Skyraker’s name change, well, there was another name change too, with The Gorgon changing her name to Gorgona. We’ll get at least a hint or two as to how those happened next issue, so I don’t want to give away too much early. So I’ll say this: Skyraker sounds cooler and more dramatic than Skysweeper, and Gorgona sound more feminine (or at least more female). You can save that info, and plug it into the info you get next issue, and see how its fits together…

5. With this issue, you’ve exceeded the original Image/Homage/DC run of 22 issues.  Does that sort of thing matter to you as a creator, or is it just another number?

KB: It’s nice, both that this is our longest sustained run and that it’s our most timely run — I think we’ve had one skip month in that period, which is waaaaaaay better than anything we’ve managed in the past. I like that a lot.

On the flip side, I spend more time thinking about things like the fact that #26 will be our 20th anniversary issue, or that as of #23 we’re actually up to #82 published issues, more than what number we’re on in this particular volume. #41 will be our hundredth issue. That’ll feel more like a milestone to me than when we hit #50 in this run. Bonus Question: Any hints as to what we can expect next time? Astro City #24: It’s hard to be a talking ape in the big bad city. Especially when you set out to be a drummer and became a super hero instead. But will that be enough? Can fame and adventure replace lifelong dreams? Do we even have to ask? Featuring Reflex 6, Samaritan and a few surprises.