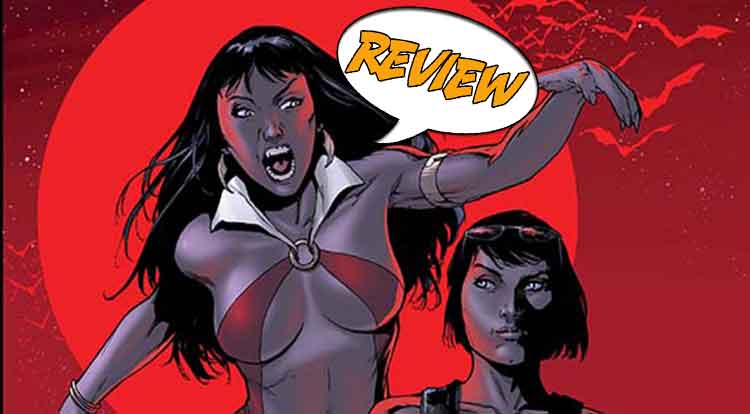 The Swords of Sorrow have been distributed, and sides have been drawn. Time to see what happens when Vampirella and Jennifer Blood meet. Previously in Swords of Sorrow:The Traveller and her Courier have handed out the Swords of Sorrow to their champions from across time and space, as the coming battle between the Prince and his bad girl squad gears up.

A TEAM UP BACKSTORY

While investigating and tracking down the Pacifica Slasher, Vampirella finds her self traveling through a rip in space, winding up in Anaheim, California, on that one stretch of road those of us who have been to Disneyland know all too well. There, she not only encounters (and defeats) the ancient medicine man turned evil, she also crosses paths with Jennifer Blood, who is also in Anaheim tracking the Anaheim Ripper. With the police on the way, the two part, but not before Vampirella notice’s Blood’s sword, thus setting up a future encounter between the two.  The two never come to blows with one another, but there is plenty of blood and killing in this issue.

While it would probably make a lot more sense to read Swords of Sorrow #1 before diving into this book, this first issue does a great deal of rehashing of what has come before to setup the bigger story that will span three more issues.  Here, Nancy A. Collins does a bang up job of giving us a real feel for who Vampirella is in this day and age, and who and what she does for a living. On the flip side, we get a huge info dump on Jennifer Blood, which goes on for many pages and gives us a detailed summary of the entire Jennifer Blood series to date.  While this is something that Dynamite could and should use in the future to help promote other books featuring Jennifer Blood for new readers, it feels like a lot of overkill as it uses up half the issue that could be used to explore the crossover world a bit more.

A CAST OF THOUSANDS

When crossing worlds, and going in depth on a character’s backstory, there are plenty of opportunities for the artist to show off his skills by drawing hundreds of characters. In this issue, Dave Acosta does a great job of giving us people of all shapes and sizes, and changes up the setting enough to make the world feel like it extends beyond the panel. Many of the action sequences are very well done as far as the staging goes, and doesn’t devolve into the needless crotch shots of Vampirella jumping through the frame. And evne though Vampirella’s costume is revealing, there is a noticeable change to the bottom half that keeps the costume from turning into a thong.

Unfortunately, I’m not a fan of the coloring. Not that there is anything technically wrong with it, but it feels a bit too light and washed out compared to the heavy inking that sadly turns shadows into black areas, thus reducing any additional shading done via color into a contrast range of four (highlights, high-mid, low-mid, and black). The overall art looks fine, but my ongoing internal battle with the high contrast house style of Dynamite continues to trouble me.

I really like Nancy A Collins’s take on Vampirella, and was looking forward to reading this issue. I’m not that big of a fan of Jennifer Blood, but getting the in-depth backstory, did make me understand where she came from and what her overall story was about.  This issue is light on current story and heavy on backstory, but that is okay, especially if it comes back around as this four-issue mini-series continues. If you like Collins’s Vampirella, then this issue is worth picking up.

This issue is light on current story and heavy on backstory, but that is okay, especially if it comes back around as this four-issue mini-series continues.