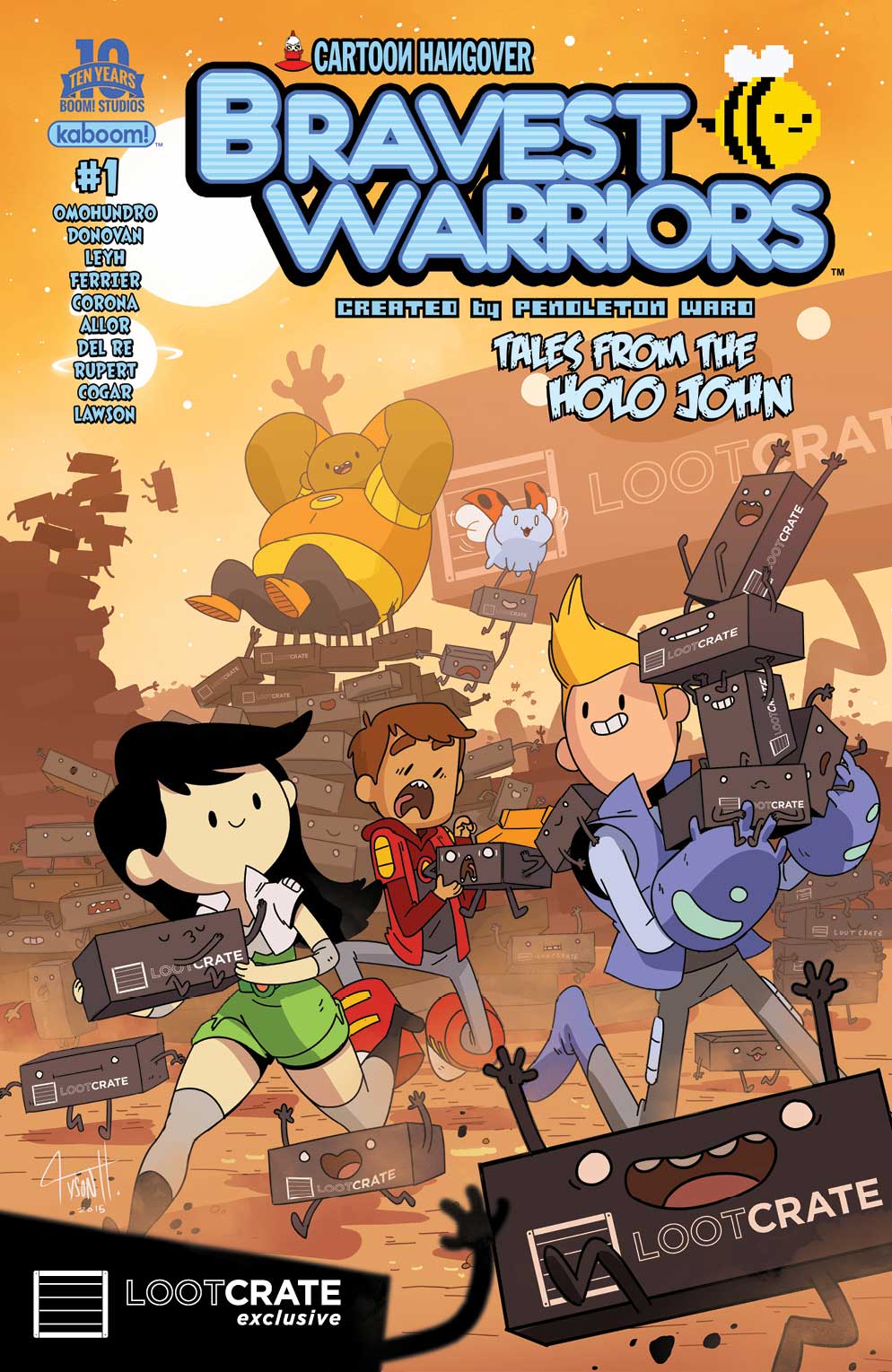 What happens when you cross Star Trek’s Holodeck with the wacky irreverence of Frederator’s Bravest Warriors? You get Bravest Warriors: Tales from the Holo John, courtesy of BOOM! Studios. (Yes, the Holo John is exactly what you think it is.) And what better way to enjoy this fun, oversized comic adventure than to receive an exclusive variant in your Loot Cratesubscription box? Loot Crate and BOOM! Studios have partnered up this May to include what is Loot Crate’s 6th variant cover and first 48-page comic ever into a crate.

Bravest Warriors: Tales from the Holo John reads as five short stories, including ones by Paul Allor (Teenage Mutant Ninja Turtles); Mad Rupert (Adventure Time: Banana Guard) and John Omohundro, the voice of Danny on the Bravest Warriors animated series. This cover was drawn exclusively for Loot Crate by Tyson Hesse, who has worked on a number of Bravest Warriors covers in BOOM!’s ongoing series under the KaBOOM! imprint.

“We absolutely love Frederator and the Bravest Warriors series, as well as what BOOM! has been up to for the past few years,” says Matthew Arevalo, Co-founder and CXO of Loot Crate. “Working with amazing people to expose our Looters to something cool and unique is the dream, and that’s exactly what happened with this partnership. I can’t wait to see people reading the comic and enjoying it.”

“A solid percentage of the BOOM! staff are Looters and love being surprised every month with a unique box. We’re thrilled to be able to share one of our passions, the hilarious and inventive Bravest Warriors comic, with all the other Loot Crate subscribers!” said BOOM! Studios President of Publishing and Marketing, Filip Sablik. “The Holo John is one of our favorite elements from the Bravest Warriors animated show. We pulled together some of the funniest and most talented creators we know and told them to have their imaginations go wild for 48 pages. Throw in the first exclusive variant cover commissioned exclusively for Loot Crate and you have the making of some truly epic bathroom reading.”

Whether you’re a huge BOOM! fan, or just genuinely curious to see what can happen in such a magical bathroom, you have until May 19th at 9pm Pacific Time to sign up for Loot Crate and receive this UNITE-themed crate.

Loot Crate was founded in 2012 by an entrepreneurial team of geeks and gamers who thought that online retail was missing some of the sense of community, interactivity, and mystery that they fell in love with at shows like PAX and Comic-Con. Each month, Loot Crate ships a themed mystery box of the best geek, gaming, and pop culture gear to a subscriber base of over 250,000 Looters. The team strives to deliver a great experience, phenomenal support, awesome community, and exclusive gear from some of the most respected entertainment and consumer product companies in the world.