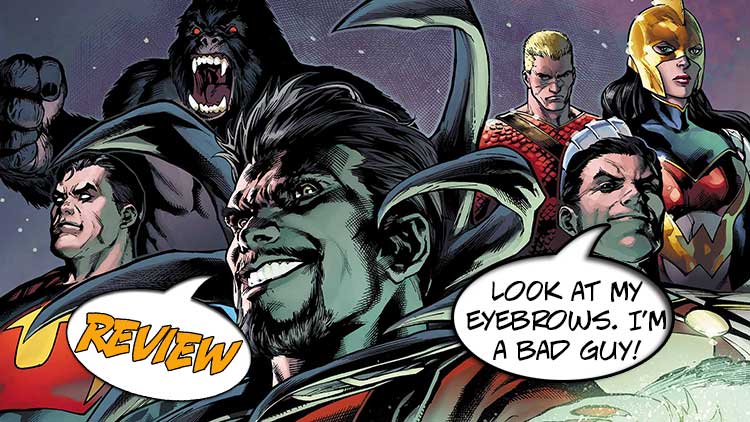 With Deimos taking control over Convergence World, the survivors of the various DC timelines have to make up their minds on how they are going to act. Previously in Convergence: Having dispatched Brainiac and Telos, Deimos has seized control of the planet, and has told everyone they can stop fighting and live in peace… providing they bow down to him as their master.

Like Secret Wars, one world is beginning to break on through to the other side, as the heroes of the New52 bear witness to the Telos planet appearing in their reality.

Okay, I’ll admit it, that was something I wasn’t expecting…

It should probably be pointed out that a giant statue has appeared and it is watching (almost like The Watcher) to see what will happen next.

That answer, dear reader is that the heroes of the worlds decide to team up and fight Deimos, who plans on killing them all anyway so he can remake the universe in his image. The Flash of Earth-w has an interesting run in with Barry Allen in a modern Flash of Two Worlds riff, and Dick Grayson of Earth-2 is sent to talk to Telos in hopes that the living planet will fight with them against the sorcerer.  It doesn’t take too much arguing to convince Telos to help – exactly two double page spreads for those keeping count, and the issue ends up being the heroes versus the villains of the multiverse, in a battle for the ages!

Like week three, this issue has a lot of promise of turning the series around. There are hints that the multiverse is returning; Barry Allen running, red skies, a double page spread showing a multiverse of planets ala Crisis on Infinite Earths… If this is the trigger event to make it all happen, then I will be beyond happy, but sadly, the events in this issue are happening so fast, the writing seems choppy and uneven. Even with Scott Lobdell getting a co-writer credit this week, one really has to accept compressed storytelling to see reasoning behind the heroes and villains taking sides against one another. On the plus side, at least it is heroes against villains and not heroes against heroes.

THIS ISSUE DOES HAVE PICTURES

As noted a couple of issues ago, there are a lot of people working on the art. At least with Benes and Pansica tag teaming off of one another, the visual continuity remains consistent throughout the book, though I’m not a fan of the heavy inking throughout the issue. I’ve noted this before in Dynamite Books as it creates a heavy contrasty mood that isn’t always tied to the story. This time it is, and it works up to a point for me.

BOTTOM LINE: I DIDN’T HATE IT

What I expected coming into this issue was another mess of dialogue, child endangerment, and over the top villainy. What I got was something that borders on the great moments in DC crisis level events – the heroes coming together to fight the good fight instead of fighting each other. While the second tie-in issues of the last week and many this week don’t tie to the main story (poor Catwoman), there is a sense that an overall move to ending senseless fighting is happening. If you are like me and have made it this far, two more issues aren’t going to kill you, and there may just be a treat at the end of the long slog of this event.

What I expected coming into this issue was another mess of dialogue, child endangerment, and over the top villainy. What I got was something that borders on the great moments in DC crisis level events