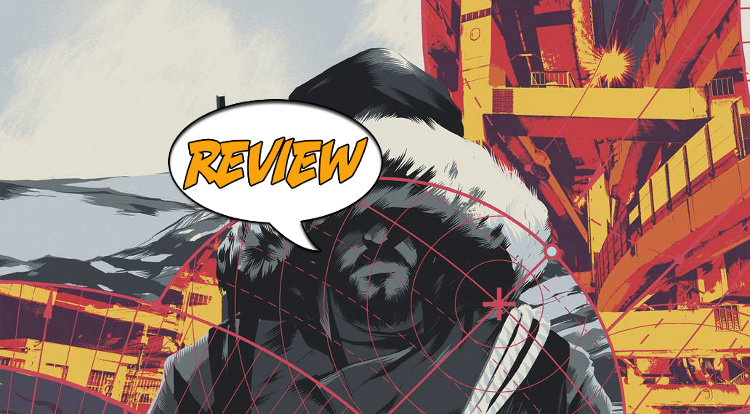 Arcadia #1 is a post-apocalyptic tale with a twist. After a global pandemic, the majority of the world’s billions live on in a computer simulation. The survivors slave on in meat space, tending the server farms that keep the much larger dead population in a state of somewhat life. All that, and it’s still politics as usual. “WE NEVER LEFT THE WORLD BEHIND.”

Arcadia #1 is a high-concept take on the familiar post-apocalyptic genre. Seven years ago, a pandemic devastated the globe, killing billions. But the world’s governments were able to upload the minds of the slain into a computer network called Arcadia, where they live on in the electrons. Alex Paknadel’s script for Arcadia #1 is smart. The issue alternates between the “meat,” the survivors, and the “glimmers,” the digitized personas of a dead people. While trying to rebuild and survive in a world where the virus still rages, the meat are faced with the task of marshalling resources for the massive server farms that run the computer simulation that is Arcadia.

What makes Paknadel’s story so smart is his presentation of human relations in a destroyed world.
The residents of Arcadia haggle with the physical world governments for greater processing power and root access to their living space, while the outside world has to rationalize the immense energy expenditures necessary to keep Arcadia running. Inside Arcadia, there is another fight for resources. The haves and the have-nots still exist in this new world, in spite of all the freedoms (tinkering with physics! virtual immortality!) that come with living inside a computer. Even after the end of the world, the squabbling and politics continue. Arcadia #1 deals with problems a lot more cerebral than the usual punk biker gangs. Paknadel focuses the plot on two interesting characters. One tends a server farm responsible for one billion souls in Alaska. The other is a rebellious teen girl, whose rebellion is stymied by a lack of seeming consequences within Arcadia. Their lives are terribly different but both are weighed down by tragedy.

“DO YOU REMEMBER WHEN PAIN CAME IN MORE THAN ONE COLOR?”

The world of Arcadia is two worlds, which gives Eric Scott Pfeiffer a lot of freedom to work. He uses a heavily lined style that is suited to the decrepit reality of the physical world. In the computer simulation of Arcadia, Pfeiffer illustrates a surreal world that underlines the possibilities present in the virtual space. In one page, a New York City designed to impress and overwhelm the new U.S. President by the residents of virtual space is drawn with a dizzying sense of space and potential. The coloring is the only real misstep on art, as the color has a tendency to overwhelm the page with variants of a single color. When Pfeiffer does employ more contrasting colors, the art is stronger for it.

BOOM! Studios advertises Alex Paknadel and Eric Scott Pfeiffer as newcomers to the world of comics, not that I would have known from reading Arcadia #1. It is a debut that is as confident as they come. Paknadel nails the plotting and characterization from the start, while sprinkling enough mysteries throughout to hook the reader. Pfieffer’s art provides punch to the narrative, doing just service to the concept of two worlds. Arcadia #1 is one of the better sci-fi debuts of 2015, and could be a title to watch. Check it out.

A smart, confident science fiction debut of a new series that is well worth your time.